I’m responding to a Challenge from a blogger I admire. Another great way to get the writing juices flowing. She posts 4 questions that we are to answer, with or without photos. Here are this week’s questions (with my answers). If you already know me, you will be able to guess which of the questions got me thinking the most!

(I’m experimenting with changing text color so hopefully my answers will be in BLUE!)

What do you consider is the most perfect food for you? (It can be your favorite food to something extremely healthy.) The POTATO! I can’t think of a single way a potato can be prepared that I don’t absolutely LOVE. Maybe because my mother was born in IDAHO and most of my ancestors are IRISH! I’ve loved potatoes since I was a kid when my Dad would fry up a bacon-onion-egg-cheese-potato mix. He’d hand us a salted, raw slice for crunching on while we waited for our favorite breakfast!

Are you focused on today or tomorrow? Lately, neither. I am apparently focused on yesterday for a while. Reminiscing, revisiting, reclaiming, reuniting, remembering…all things I’ve spent this year doing, and enjoying every minute of it!

I’m slowly writing up stories from the Epic Roots Road Trip we took this summer. 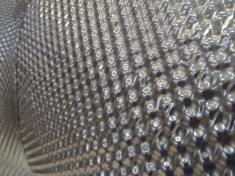 If you could interview one of your great-great-great grandparents, who would it be (if you know their name) and what would you ask?

I would ask John Ray Young:

“What beliefs did you get from your father Joseph Young, that you passed on to your son, my great great grandfather, Brigham?”

“What did you teach him about religion?”

“What did you model for him about the treatment of women?”

What inspired you or what did you appreciate this past week?  Feel free to use a quote, a photo, a story, or even a combination.

I was inspired this week by my friendship with Karuna.

If you have not seen her blog, she shares an amazing spiritual journey and is becoming quite adept at photography!

Our history is so long, with its ebbs and flows, and yes, bumps. I love knowing someone for a really long time. Karuna is the reason I started blogging and I am so grateful. I have thoroughly enjoyed the process, even when writing about difficult subjects. 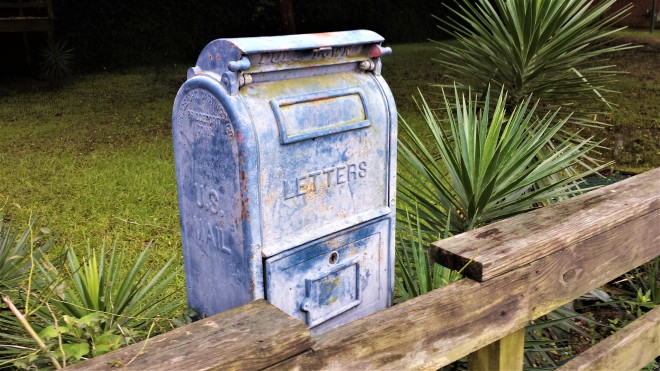 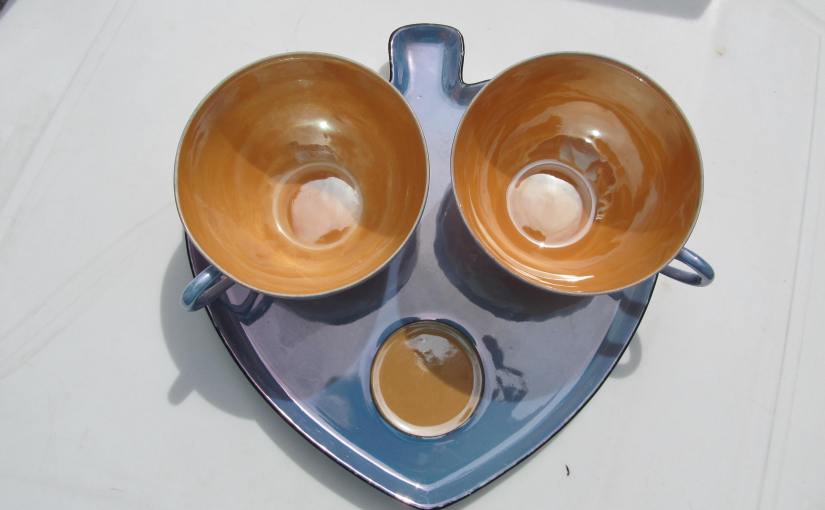 OK, here’s a story for you about Bridge, not a bridge or the bridge, although there are significant bridges like that in my life. I have even posted about some of those.

No, this is a story about the card game, Bridge. But be warned! There are three tragedies in this story and only two happy endings.

For many years, I held onto a beautiful treasure that belonged first to my grandmother and was passed down to my mother. It was a lovely novelty set of China, used only for Bridge Tournaments! A set of 4 plates, one shaped to represent each suit in a deck of cards, and a tea cup to nestle on to each plate. The plate below is a “Spade”. The beautiful shades of silvery blue with goldish orange accents always grabbed my attention.

There was also a clever stacking teapot, creamer and sugar container.

A stunning collection really, and I carried it around with me for more than 30 years, only occasionally unearthing it from it’s elaborate safety packaging, just to look at it.

Tragedy number ONE: In my 30’s while moving, a well-meaning helper placed the very special treasure box containing my mother’s Bridge china set, as well as a pile of antique handpainted, glass Christmas Tree ornaments, on the trunk of my car. My friend was sure I would see it there before driving off to the new house.

TOPPLE, CRASH, SMASH, CRUNCH, and all that was left was a huge box that when lifted, made that nauseating, tell-tale sound of broken glass. (Silent, major profanity here remembering the event. I did NOT keep those swear words to myself at the time though.)

I was as crushed as all those shattered heirlooms!

The happy ending for that tragedy is two-fold. One plate (the “Spade” in the photo above) and two teacups were unscathed! AND, a few years later, I met this woman, a talented potter, who took all the broken pieces of the Bridge Tea set (of COURSE, I had not thrown them away!!) and “mosaiced” them onto small clay flower pots, so I could put lovely, growing things in them.

(As I write this, I am remembering one of my favorite novels called Broken for You by Stephanie Kallos. A great read partly about broken china and wonderful concept!)

Tragedy number TWO: I have been complaining on my blog that I lost my camera. I even let this loss prevent me from blogging for several weeks!! (I mean, what is a post without visual aids, right?)

I did try last Wednesday to use my phone to photograph the above plate for this Bridge Post. Lousy shots so I was grieving for my old friend even more.

I loved my camera. Just a very small, simple point and shoot Canon, but with the best telephoto and macro capabilities of its generation. I had become intimate with this camera, familiar with all its quirks and loving it anyway. And it knew all the most moving moments of my life, first hand. So the loss has hurt. No idea where it went to, but we have recently moved from the top half of the house to the bottom to make room for my son and grandsons, so I kept thinking I had just packed it somewhere and that it would turn up…but it didn’t! It was nowhere! Another heartbreak.

The happy ending? Just yesterday, while facilitating my new Women’s Art and Support Group, I was presenting the day’s activity: “crafting art out of things you already have around your home”.

I LOVE photography. I have since I was in the 4th grade, snapping away with my little Brownie camera. I didn’t get to be any good at it until these more modern digital options came around. But that’s only because I can afford to take a million pictures now, knowing that somewhere among the plethora of lousy shots, might be a surprise.

Anyway, one of my favorite hobbys for gift making and the occasion Craft Fair is to use my favorite photos for handmade greeting cards. 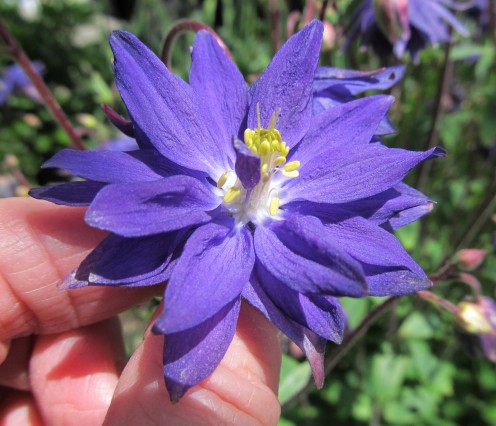 Three examples of cards I’ve made.

Well, I opened the box I keep the finished cards in and Voila! There was my camera!! It had been hiding right there where it belonged!! I cried and had to excuse myself from group to go tell James I found it because I knew he’d been plotting to buy me a new one.

I LOVED this happy ending!

Tragedy number THREE: My Mom died when I was young so her keepsakes still mean a lot to me. Those China pieces are precious, not just because they are beautiful, but also because they are a reminder to me of the amazing woman my mother was.

The first half of my life with her, my Mom was all involved in motherhood, house-wifing, PTA, her new church, and her favorite, playing Bridge at her Women’s Club in La Jolla. Apparently Mom was a secret Champion. Taught by her church upbringing that she should never brag, we didn’t even know the trips she was taking up the West Coast were because she kept winning huge competitions in Tournament Bridge! (She did finally tell us shyly about beating Raquel Welch’s Mom at Bridge at her local Women’s Club though.)

She would bring home souvenirs for her daughters from her mysterious trips. The hotel rooms were loaded with soaps, lotions, sewing kits, etc) and from the tournaments, lots of Cracker Jax-type charms. Tiny metal and plastic animals, cars, crowns, keys and little people. I never understood the charms and figured maybe they won them or used them to bet with or something?? Anyway, she seemed happy and lots of folks were drawn to her!

The last half of my time with my her was painful. To my sisters and me, as her children, we suffered from her depression and alcoholism, but it must have been unimaginable for her. Her last few years alive, she just really did not want to be here…period.

When I was a youngish teen, she tried for that big “Final Check Out” twice, only to be rescued from her pill-induced coma’s. The third time, she wasn’t taking any chances and used a much more reliable method, a gun. She finally succeeded. Gone from her pain.

But I do have to say that her life, the way she knew who she was, and the courageous way she tried again and again to find a way to be herself in a world that repeatedly stomped on her, have been a non-stop inspiration to me. She left the church her family was adamantly committed to. She joined the navy in the 1940’s, almost unheard of for women. She tried being the domestic handmaid she was programmed to be in her family. And finally, she struck out on her own, still determined and still searching, until her own chemistry got the better of her and she finally succumbed to the only answer she could find. To me her life shines brightly, full of examples and lessons to learn.

As Don Henley says in his wonderful song, “My Thanksgiving”,

“Sometimes you get the best light from a burning bridge.”

I’ve never tried this before…posting just a video…but since my camera is missing and I could think of no great photos to post in honor of the FOURTH, I thought maybe you’d enjoy Geoffrey Castle performing.

Crank it up, if you are of a mind to. Though it is wonderfully loud on its own…

My mind reels at the topic Helen! A generational hazard, I guess. My youth was filled with MOSTLY songs about freedom.

I couldn’t stop the tidal wave of titles flooding in so I just picked at random.

But I like this one a lot (and the movie this clip comes from…Kevin Spacey as Bobby Darin!). It’s pretty simple and catchy even though at the time, the older folk singers had some doubts about the author. (He finally won them over I think.) 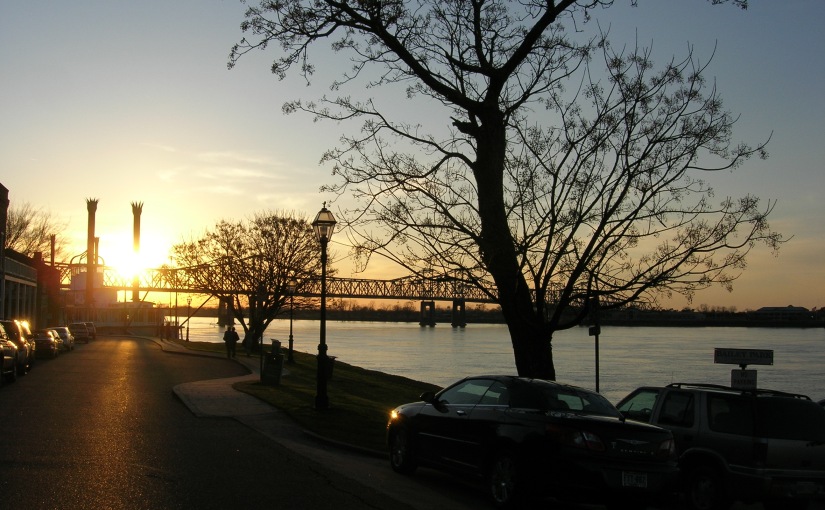 The word Delta, for me, has only one meaning.

I guess my world is pretty small.

I blame (and thank) my father, who taught us the only real sin in life was boredom. All other transgressions were lessons we just had to learn, but boredom was an insult to God.

Dad taught us that at any moment, in any setting, we could simply use our senses and become aware that we are always surrounded by miracles!

So…though I have seen many places, I have never needed to travel very far to be completely captivated by my surroundings.

Therefore, in my small world, the word “delta” immediately brings to mind the area of the Deep South that I lived in. (Well, that and maybe the airline that could get me there…) 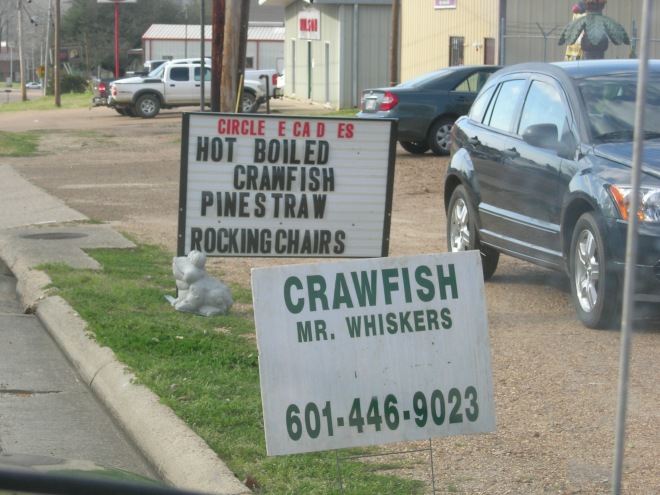 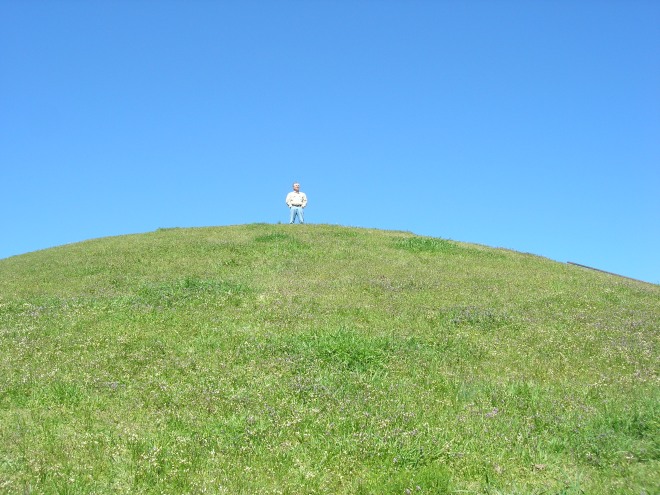 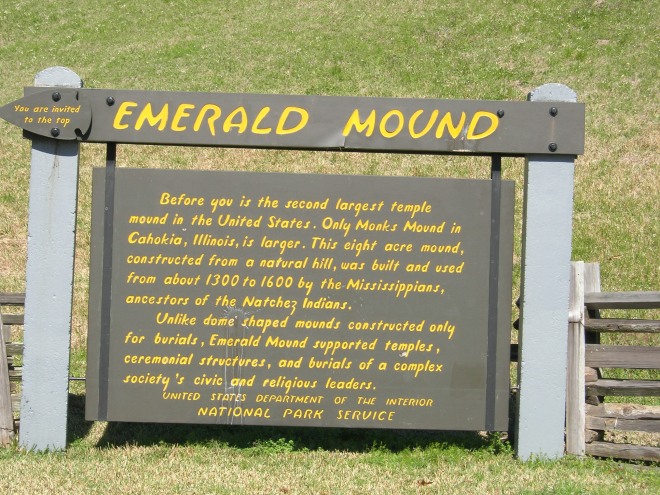 Heritage
The word for this week’s WordPress Challenge theme is Heritage. This “wall” in my home  office/group room was created to balance the masculine energy in my house these days as I live with SIX MEN!

But it really represents my Heritage. I come from a long line of very creative and powerful women, specializing in survival. Most of them, through necessity or circumstance, were Single Mothers.

These lacy, pastel bits and pieces are from these women, as far back as one of Brigham Young’s many wives…all of whom were basically “single mothers” 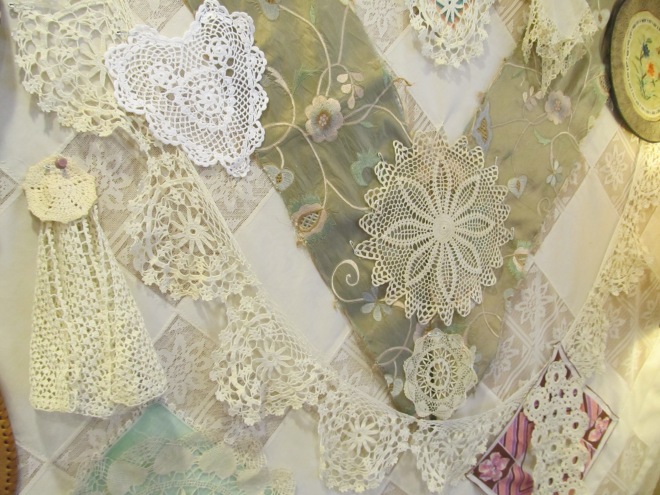 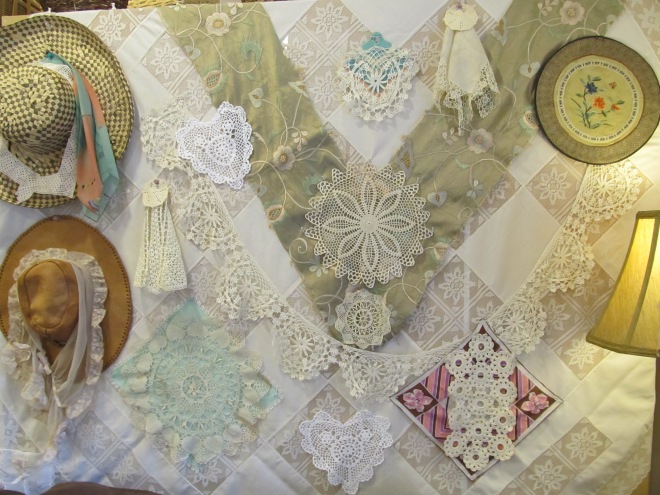