Loki is the sweetest cat ever (well, except for Lucy!)

Terrifying growth! And he still has 2 years to get to full size! 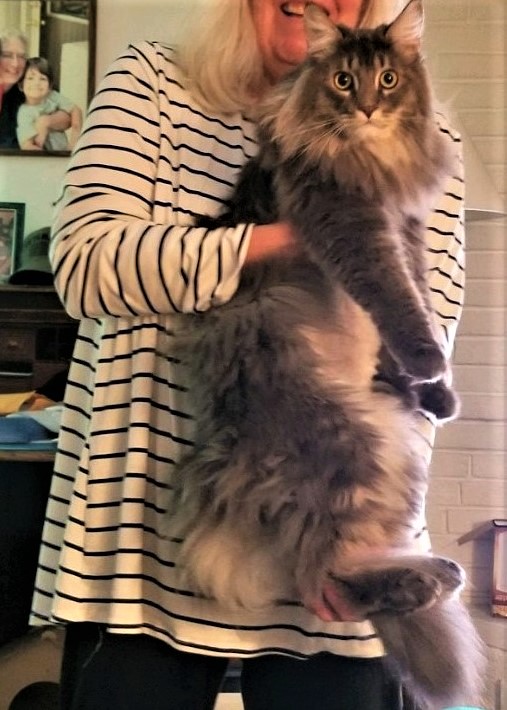 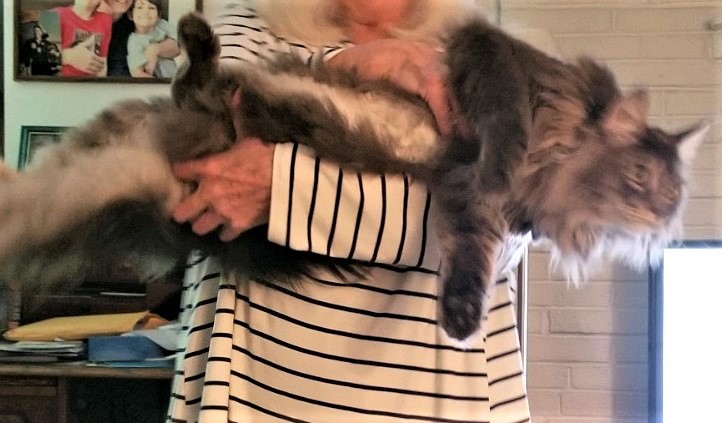 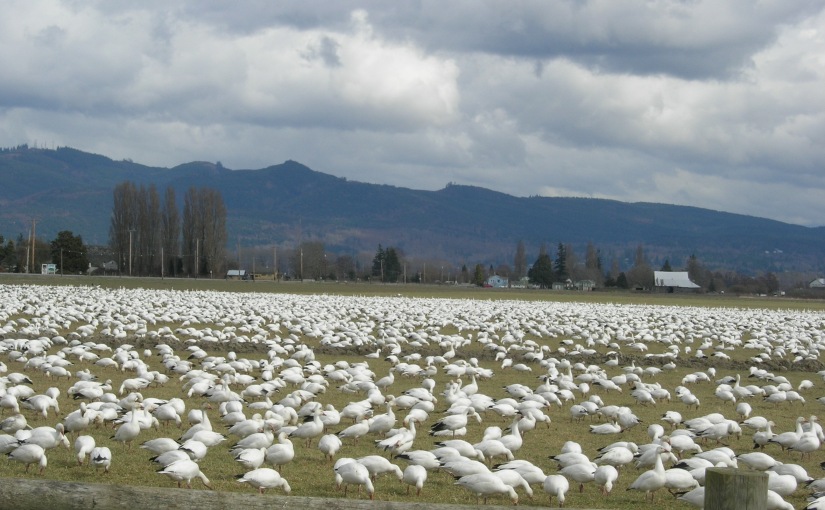 Oh I am so excited to find this “challenge”! BIRDS!!! One of my favorite topics!

And just yesterday, I found some old photographs (remember the paper kind?) that took me way back to my very first pet, Fluffy, the House Duck. I wrote out the story of Fluffy when I was about 10 years old and won an elementary school creative writing contest. I was so embarrassed (and proud!)

You can read the “adult version” here:

But for this week’s challenge, here are a variety of more recent photos. To me it’s no surprise I have so many pictures as ducks and geese are favorites of mine, given my early water fowl imprinting with Fluffy and all. (Just don’t tell my Crows and Hummers, as they get so jealous…)

First, even though I live in a very country-ish suburban neighborhood, a duck sighting here is unheard of. But this one year (2002), for some reason, I had a visitation. 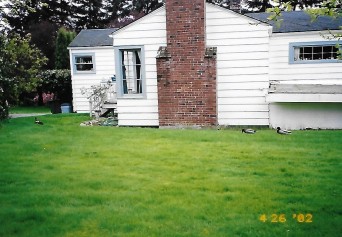 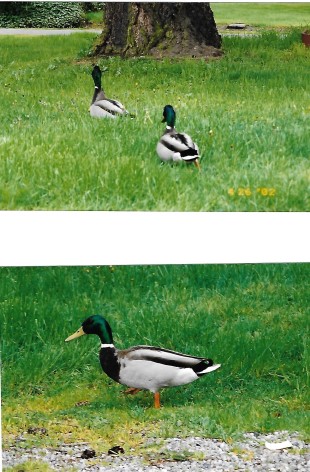 Then, on a trip to the Deep South a couple of years ago, at the New Orleans airport, I was visited again! 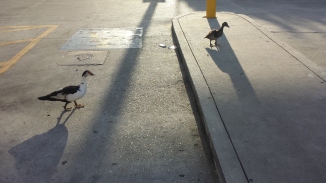 Next, very recently, this guy just dropped by to say hello. He spent the afternoon hanging out in my side yard. He seemed quite tame and very amenable to a photography session. His colors were so beautiful and I kept imagining that I was seeing a flash of bright blue along his side… 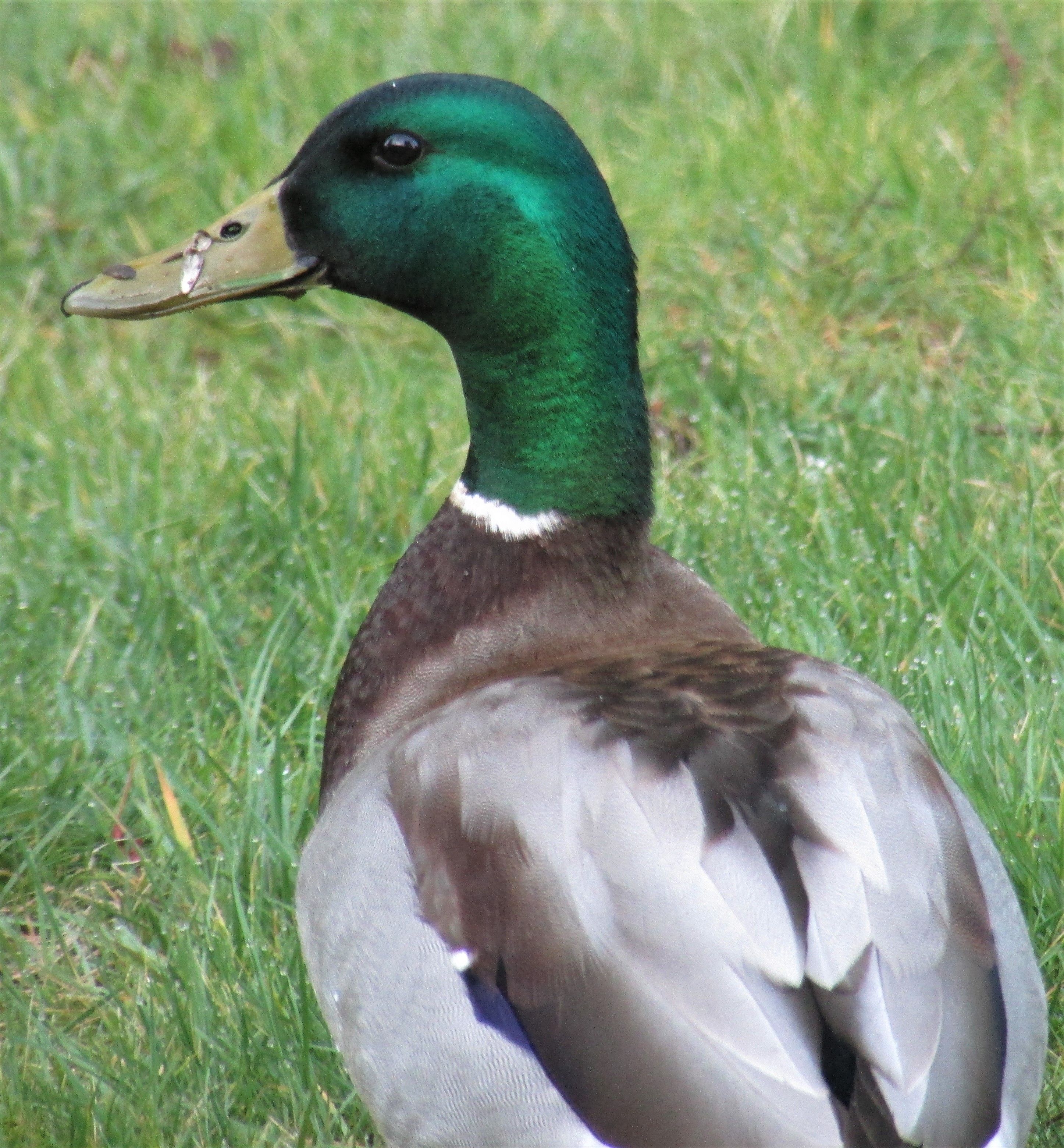 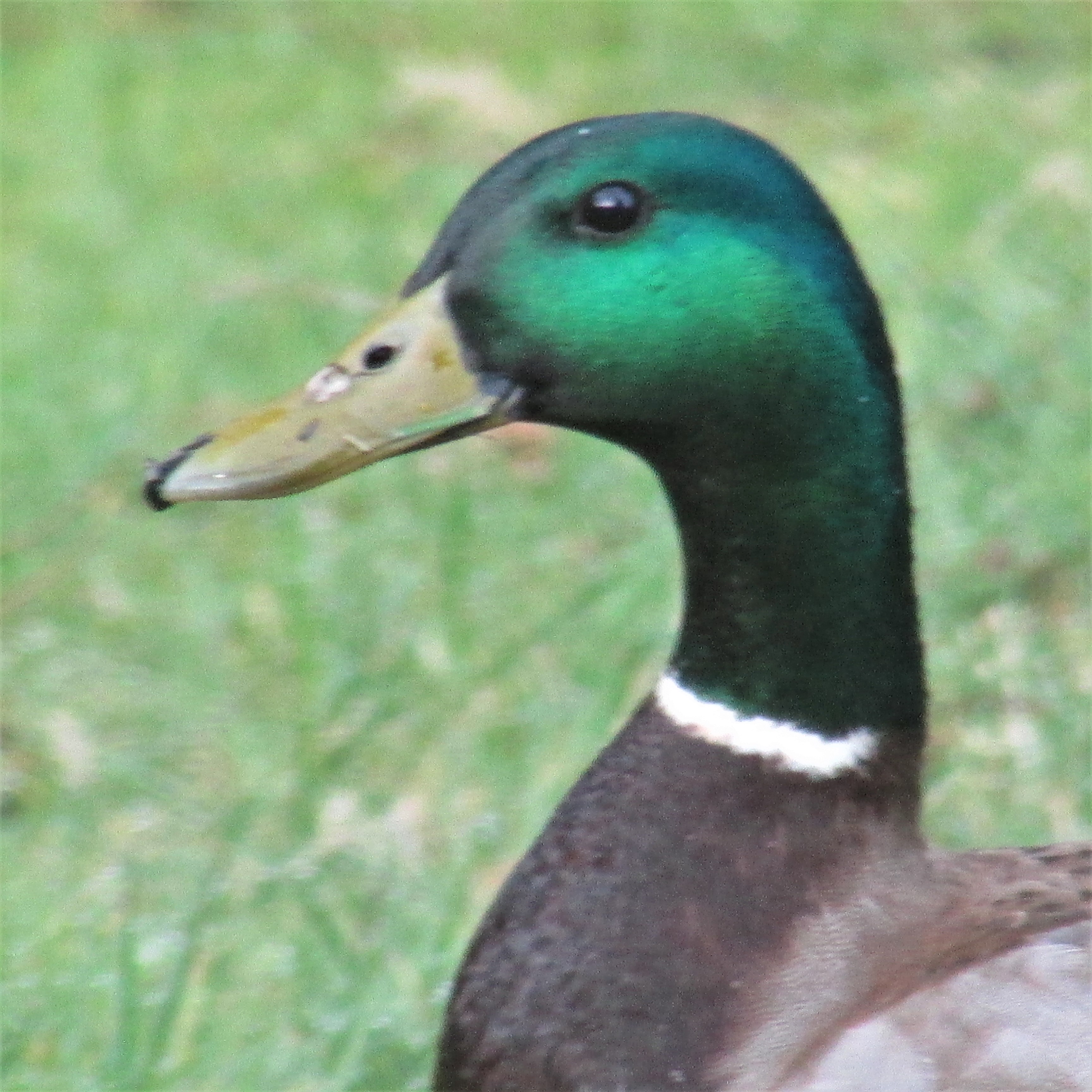 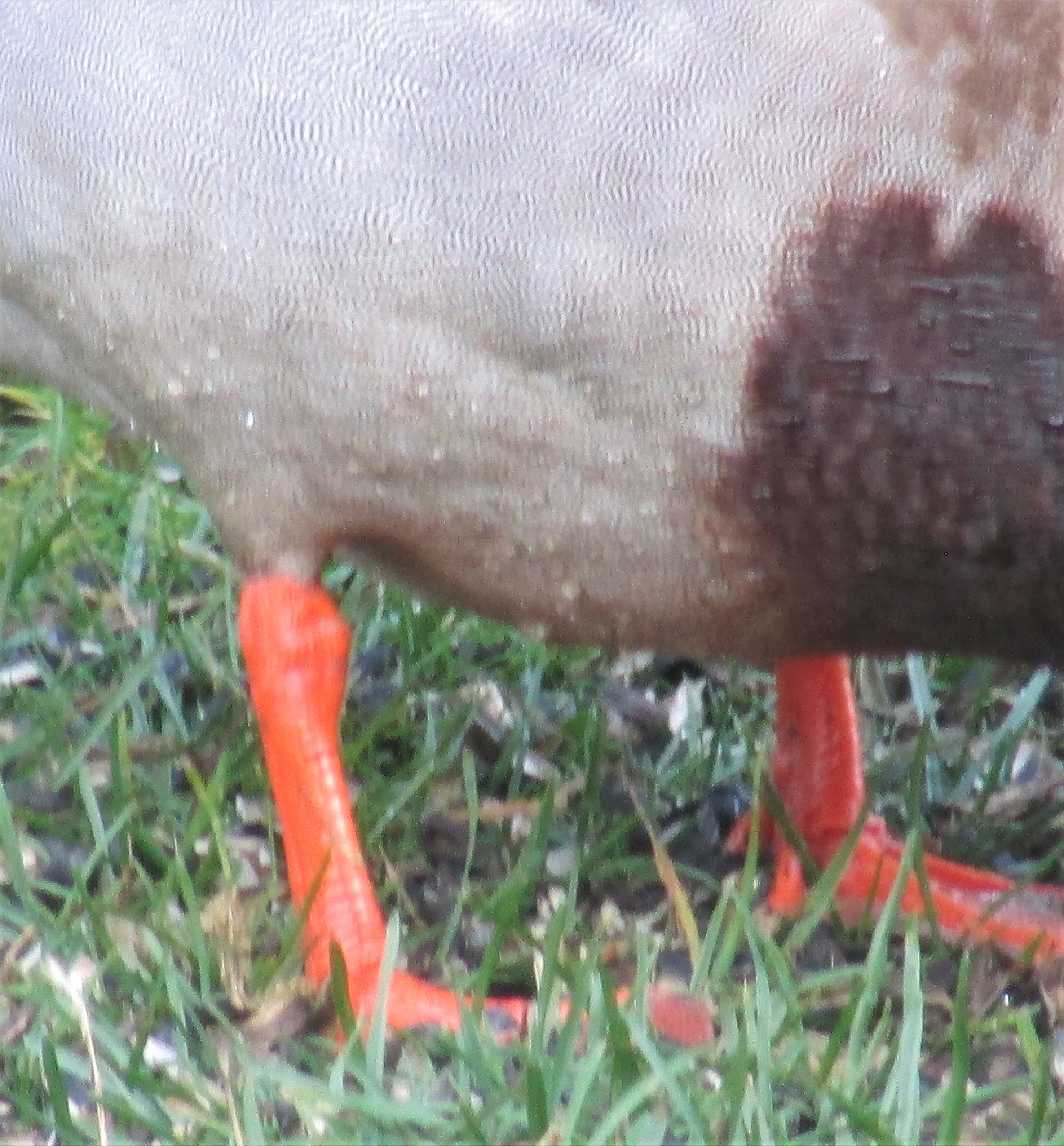 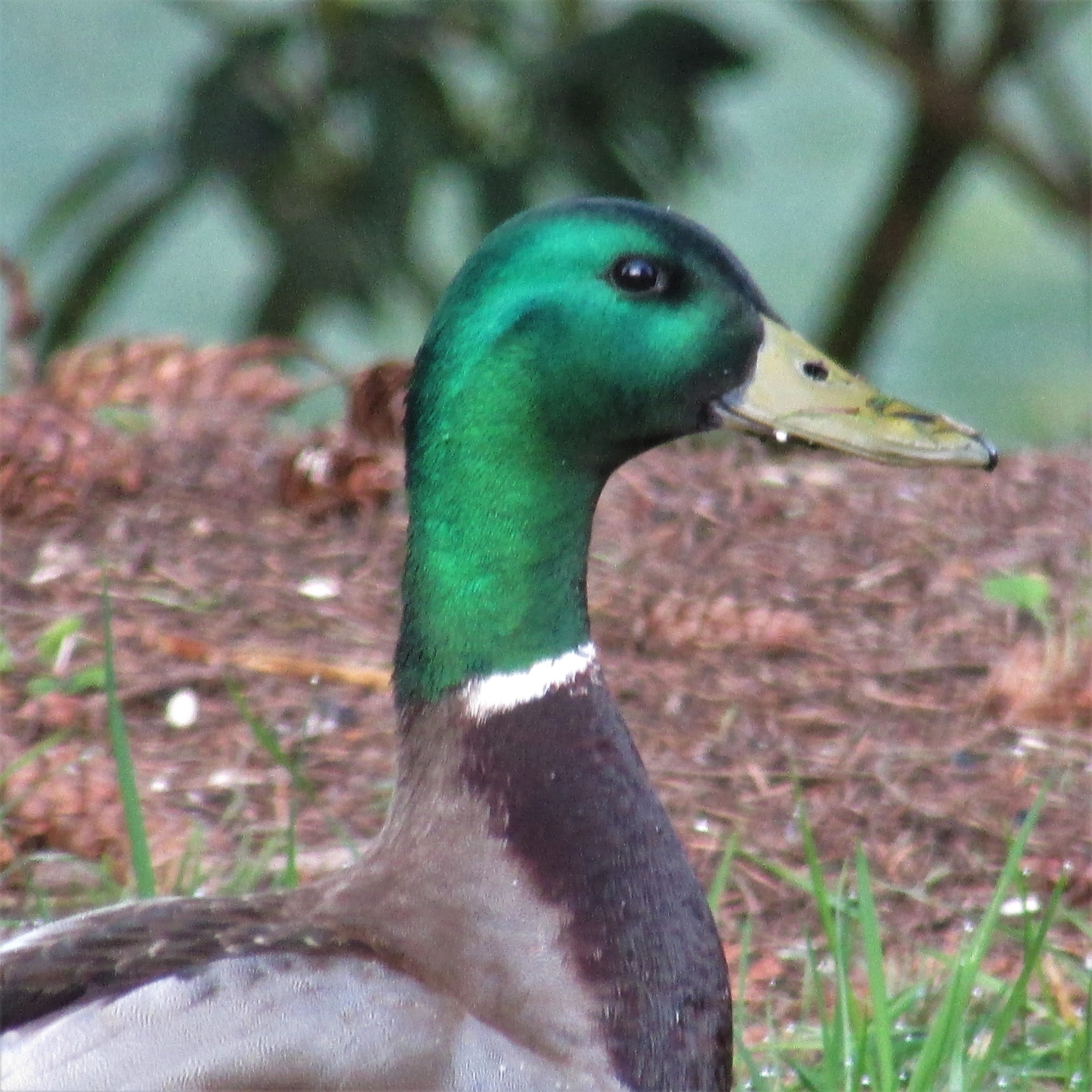 Turns out a neighbor on the next street over has a large pond on their property and these ducks return to every year. That probably explains the 2002 visit also.

And not to neglect geese…on a regular trail we travel several times a year, from home to the San Juan Islands, if we are lucky, we see this! These are shots taken in the not-yet-blooming Tulip fields by La Conner, Washington, a favorite stopping place for migrating Canadian Snow Geese. The pictures are not great but you get the idea.

I just wish I could share the sound with you. It’s like nothing else. When these geese are having lunch, it kind of sounds like an audience sitting in a Concert Hall, right before the show begins…low conversations, muffled chattering.

Then when they take flight, BOOM, it’s like the explosive standing ovation, crowd clapping and cheering, when Bonnie Raitt finally walks out on the stage!! 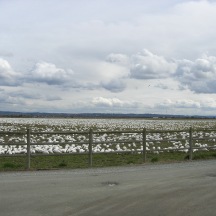 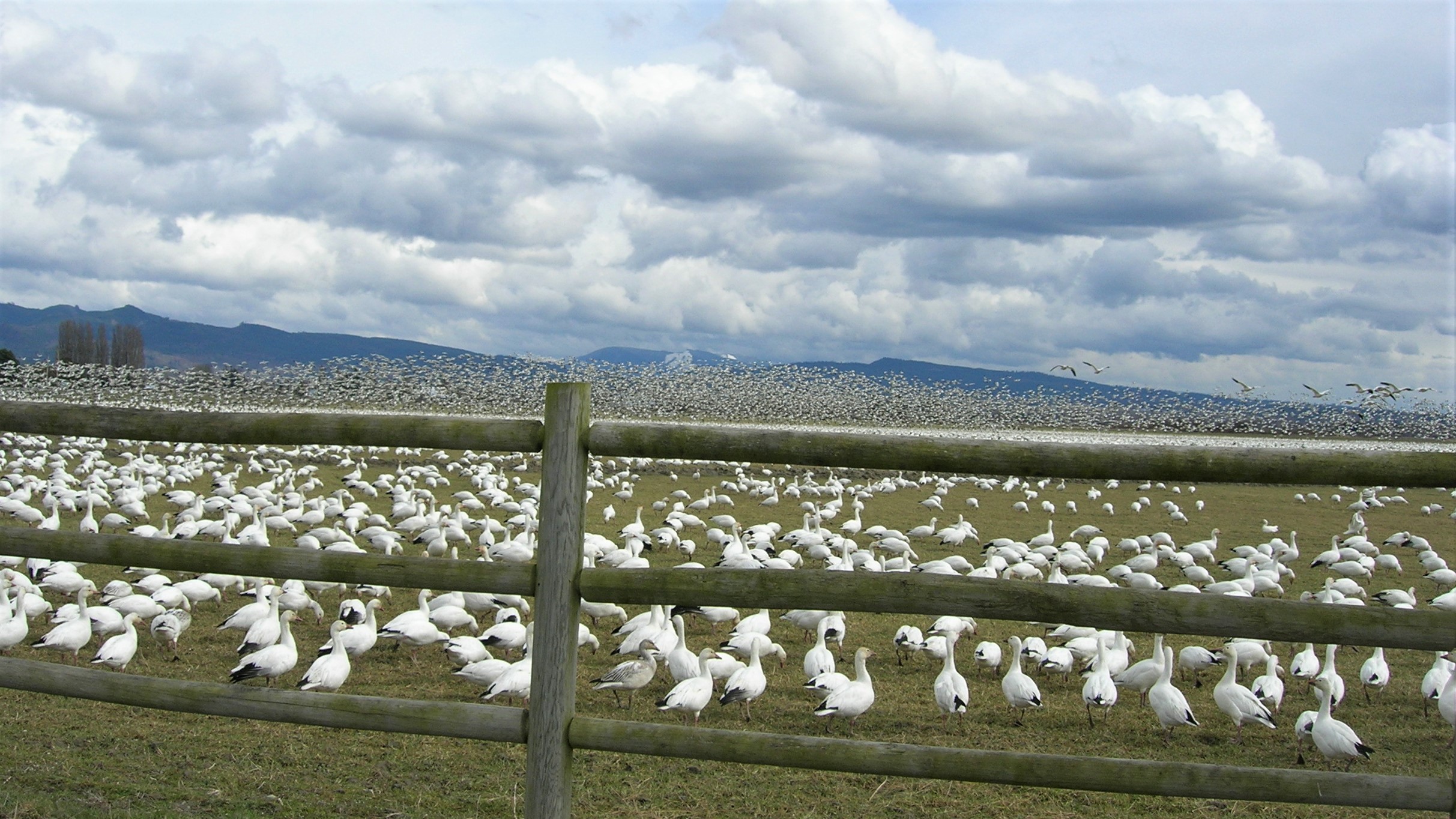 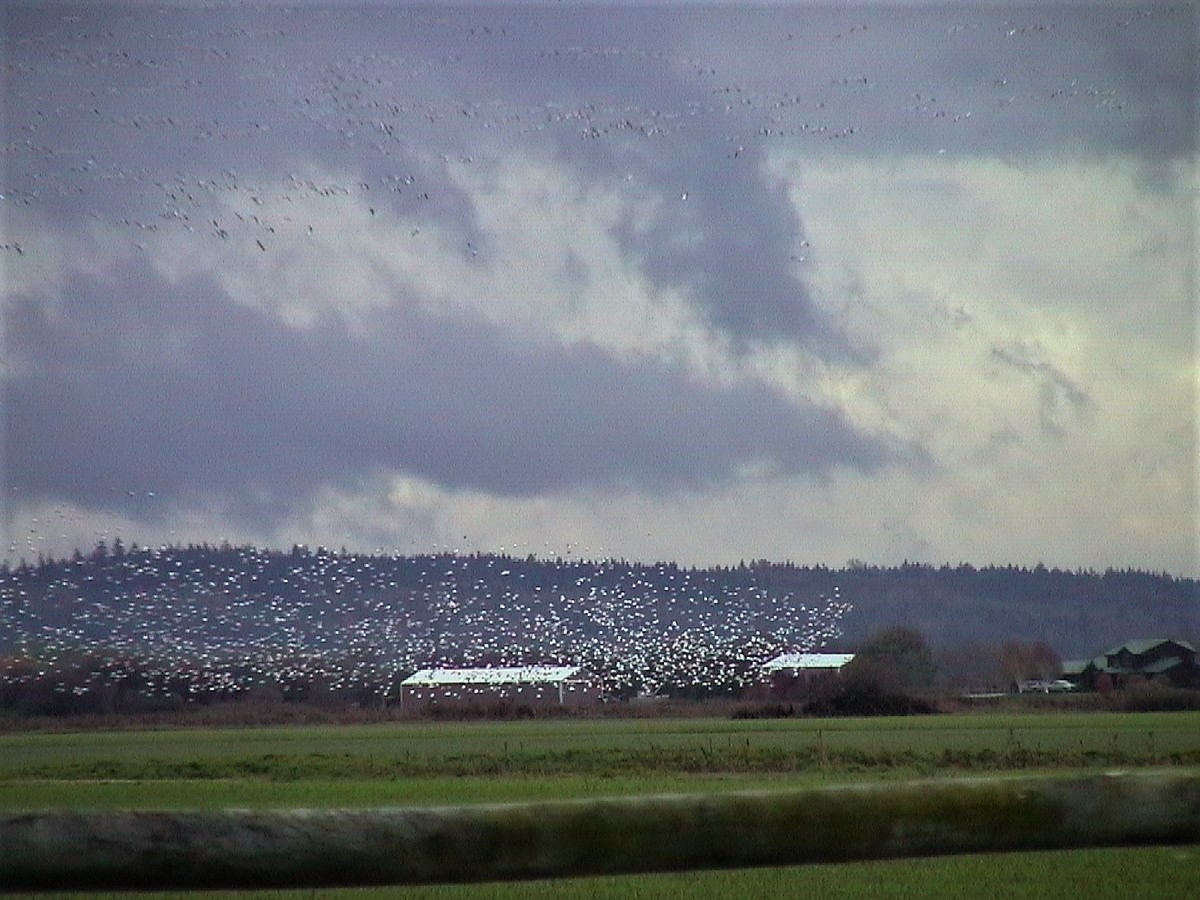 All in all, Ducks and Geese figure bigly in my life!

Thanks for a wonderful challenge!

Now off to play a favorite childhood game…Wonder if we can do it and stayed Socially Distanced?? 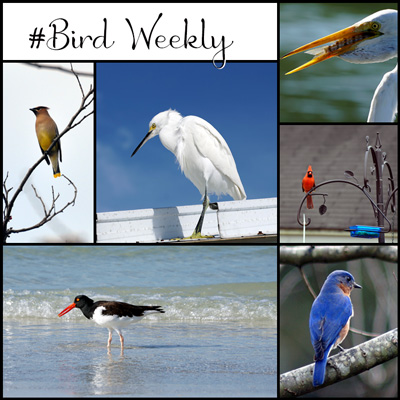 Impossible to be down today…

Meet our newest family member…long awaited (a couple of years)!

This puppy is very special, bred by Crooked Rooster Farms in Snohomish, WA. He is a Border Collie/Golden Retriever blend, bred for the Collie’s intelligence as well as the temperament of the Retriever. He is already exhibiting both those qualities.

And we think he will probably grow to be more Retriever size (he’s a little CHUNK!) than the Border Collie.

Even Loki, the Maine Coon kitten, who has had the run of the upstairs house…until now. He can’t wait to be done with his silly cone so he can romp with the puppy! 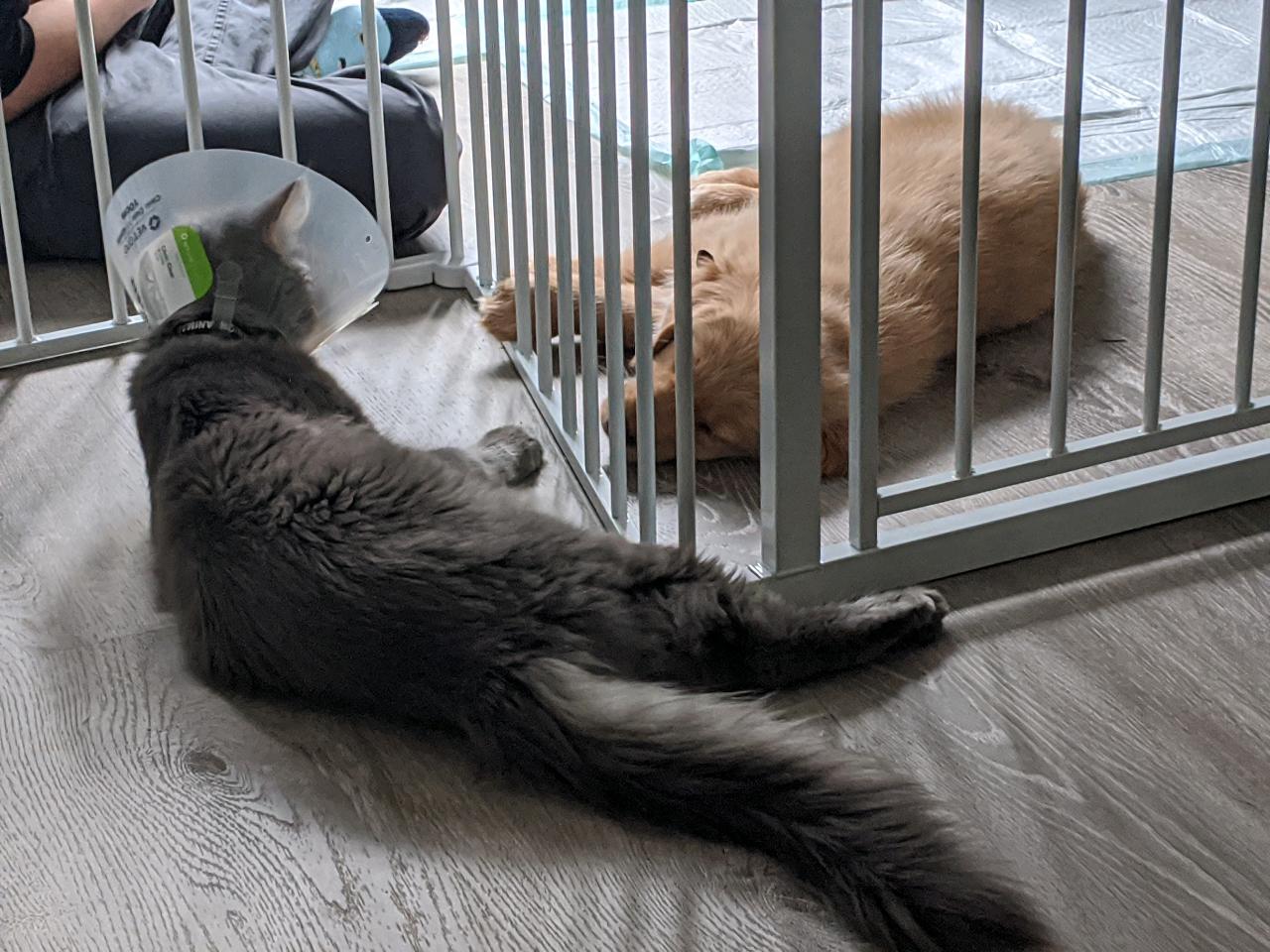 If THIS doesn’t bring a smile, the Virus has already WON!!!

And if you need even more “uplift”, read (or re-read) this!

1) This guy starts visiting outside regularly and riling up Phineas and Zorro (our indoor Cat Bosses). 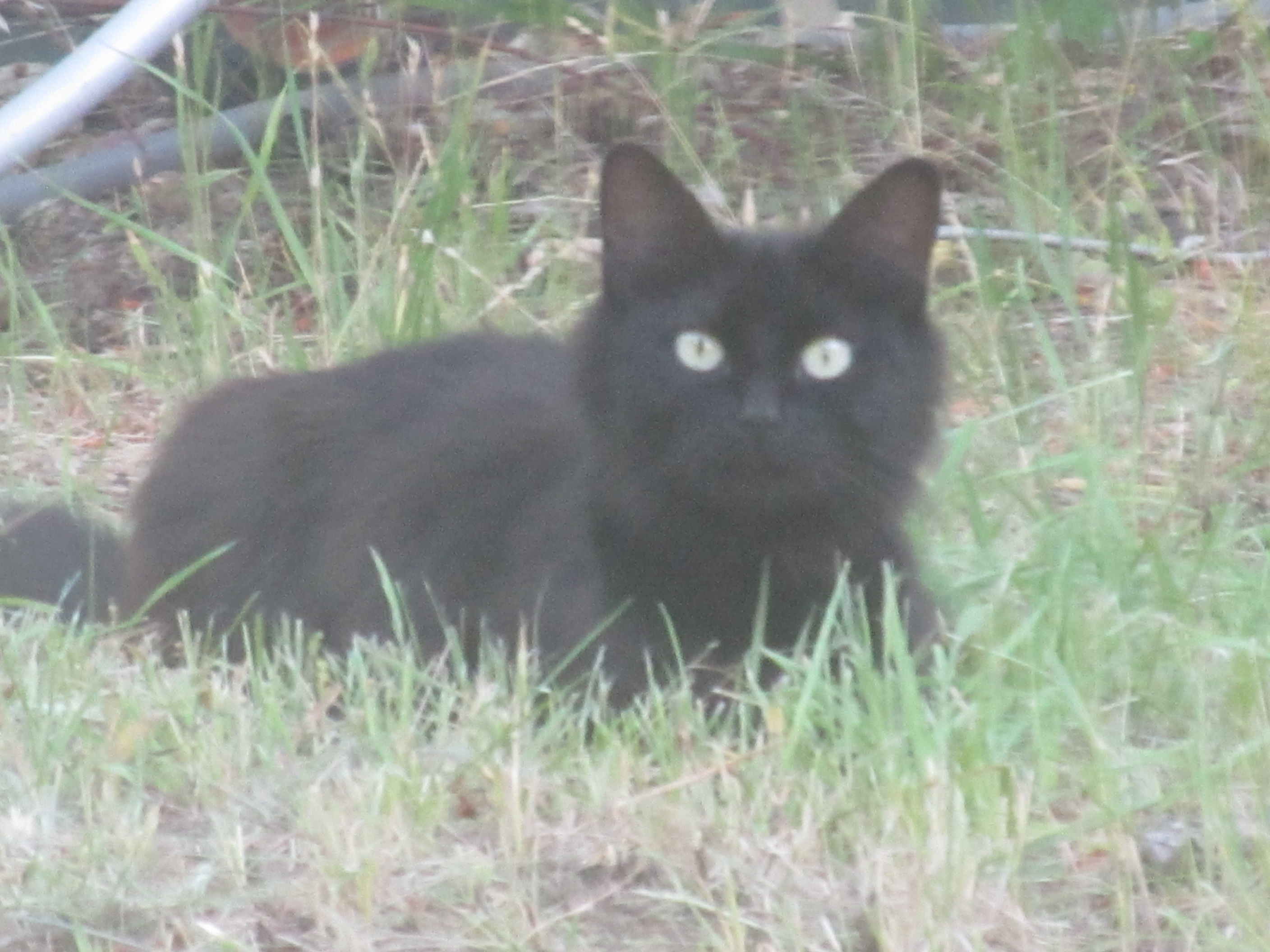 We think this is an “Evil Wild Tomcat”, just stirring up trouble.

2) Then James has a big surprise. He sees movement under the wood pile, just beyond where we sit on our porch swing to look out over the valley. He literally drags me dripping out of my shower to come and see!! 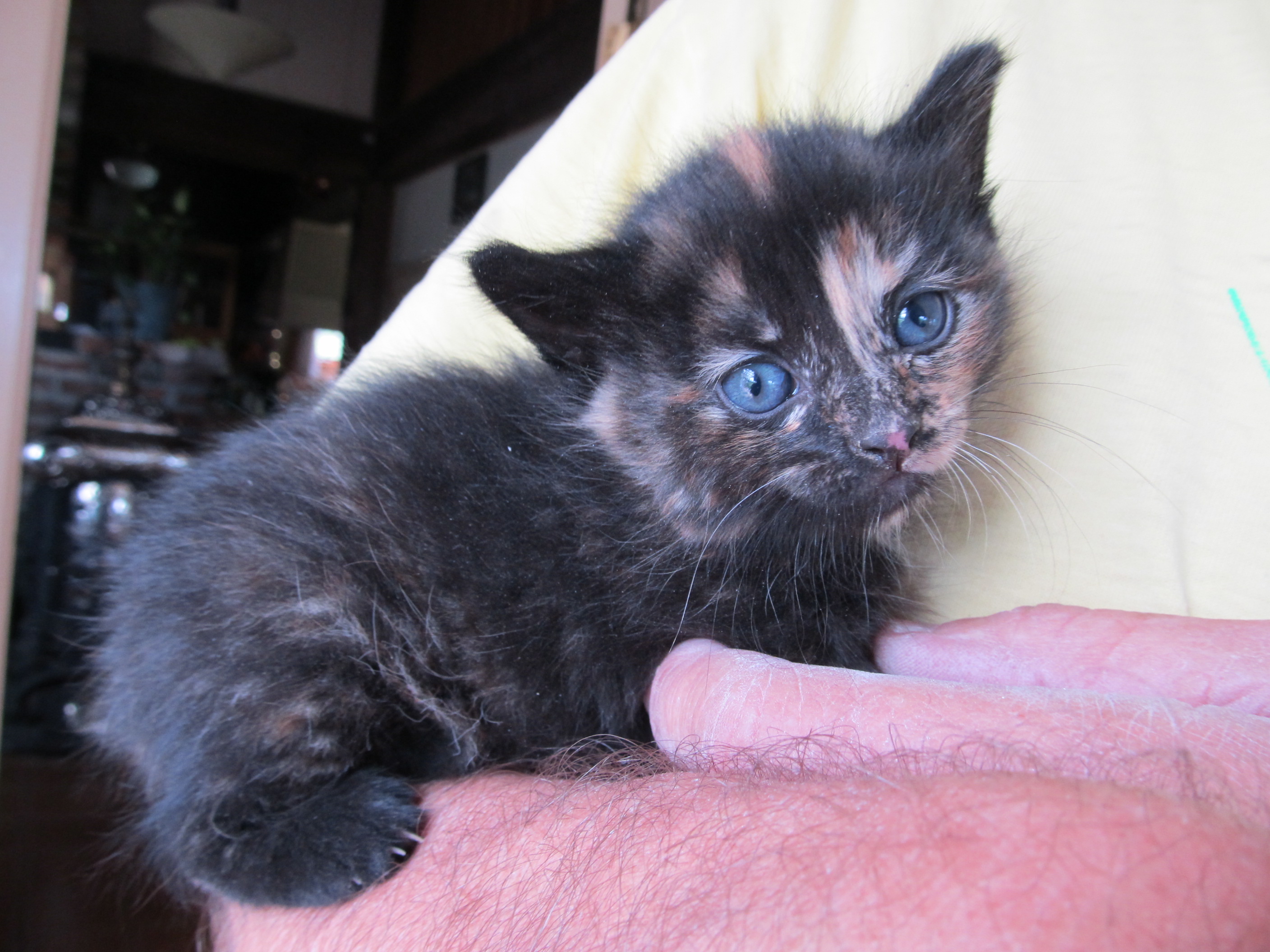 It’s a close call but, after a while, I convince him to put this baby back where he got it as it is WAY too little for humans to mess with.
3) Then later that day I see a different ,but regular visitor in our yard and she is glowing in her bulging state, so I have to take her picture.

(Can you see why she is “glowing”?)
4) James, uninterested in my Mama Deer, has stationed himself by the woodpile, you know, just in case….

We already have two “very bad cats” (aren’t they all?)

I had a hard time getting James to put them back. I’m afraid we may have three new residents if I don’t watch him (James) closely!
6) Speaking of watching closely, apparently “Evil Tom Cat” is actually “Protective MOM!” Here she is guarding the woodpile.

7) And as if this was not enough “cute” for one day…as we arrived home from a quick trip to town, look who we nearly ran into!!! Our Glowing MOM!

She is still licking them off.

We watched as she led them off into the woods for safety, and no doubt, so she could have a rest.

She’s not so Robust/rotund anymore, is she?

8) Had enough Cuteness for one day??? Not so fast! We get home and have to check on our 3 new little “guest” kittens, right? And guess what!!! 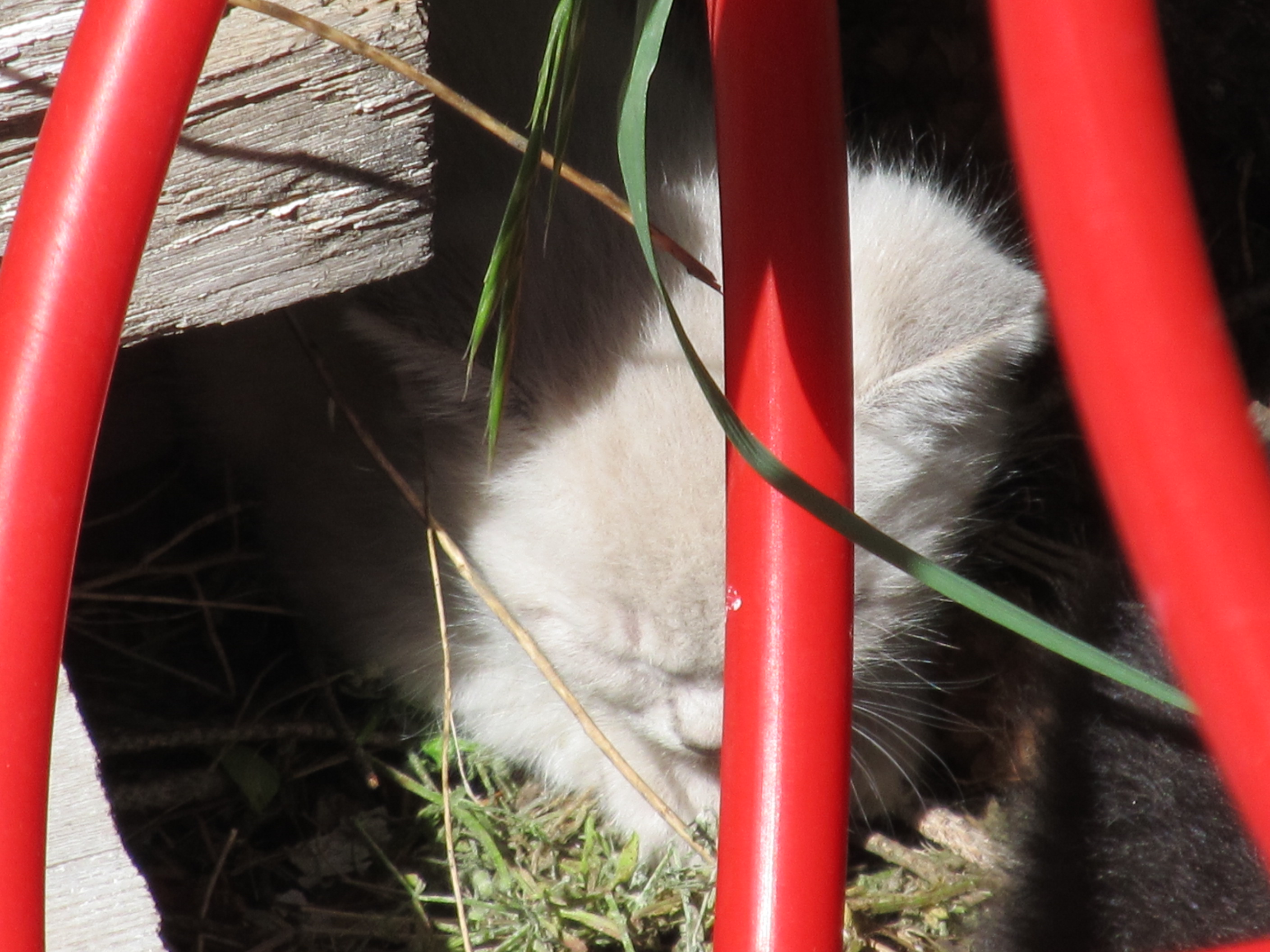 We discover this white one!

As Paul Harvey would always say “And now, the rest of the story.”

Any guesses as to which one we kept??

We eventually found homes for 3 of them, with folks who were committed to socializing these terrified feral kittens, but this little tough one, the smallest, would just not leave us alone. She would bound out of hiding to see us, even as her siblings would scatter and hide.

Meet Lucy, named by my grandsons who wanted her to have a strong (super hero) girl name. (The movie Lucy had just been released and though they were not allowed to see it, they got the idea from the previews.) 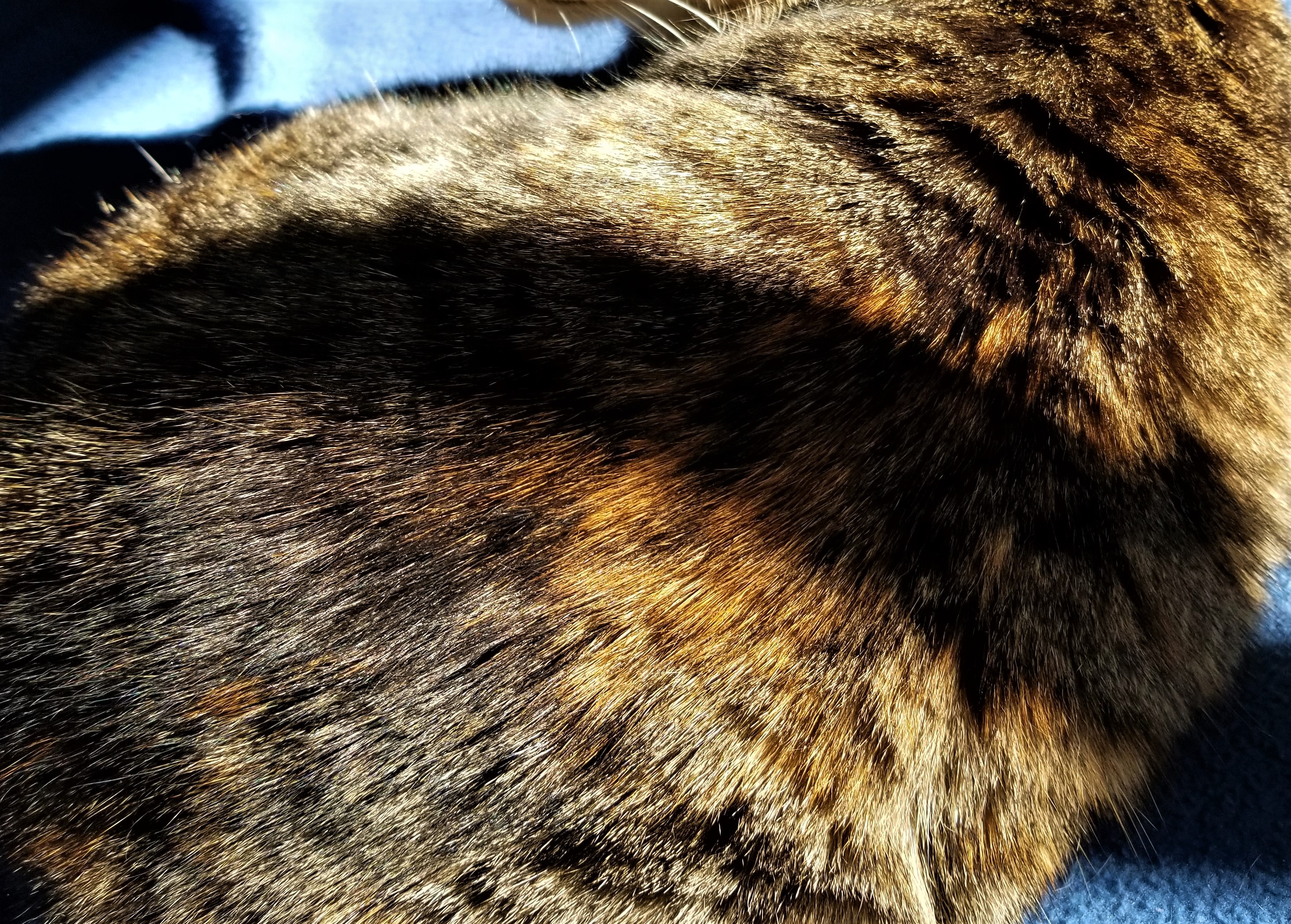 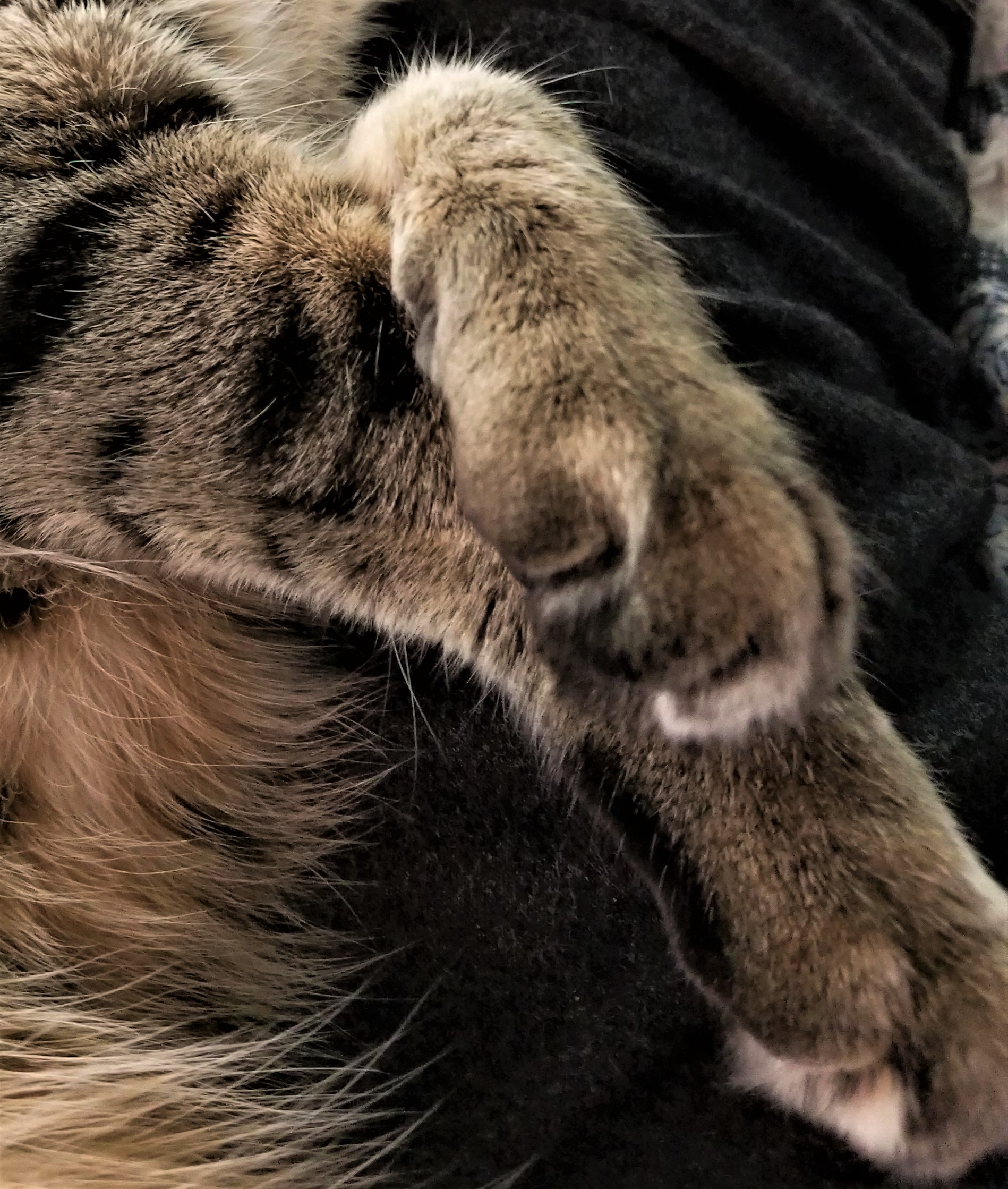 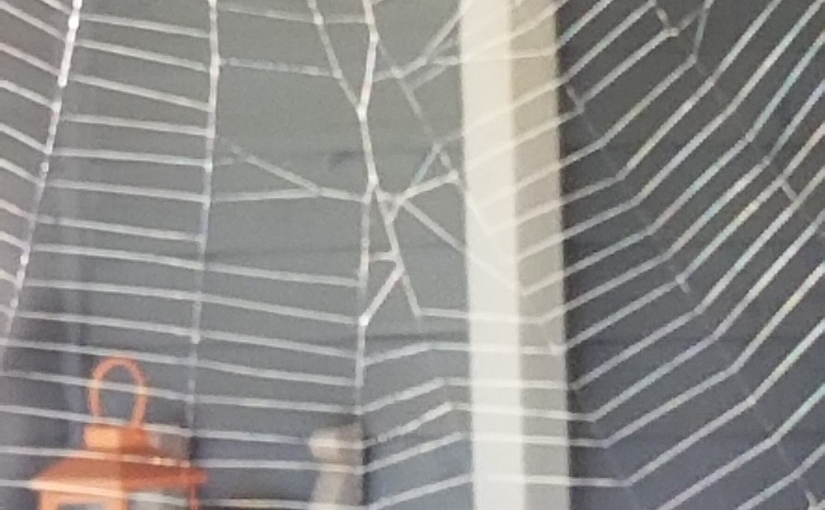 But my favorite Filling the Frame are these. Just a little pile of Lucy parts!

And this last was an accident. I wish I could have really focused on the web.

Some weird combination of sun behind me or something. I just couldn’t quite get it! 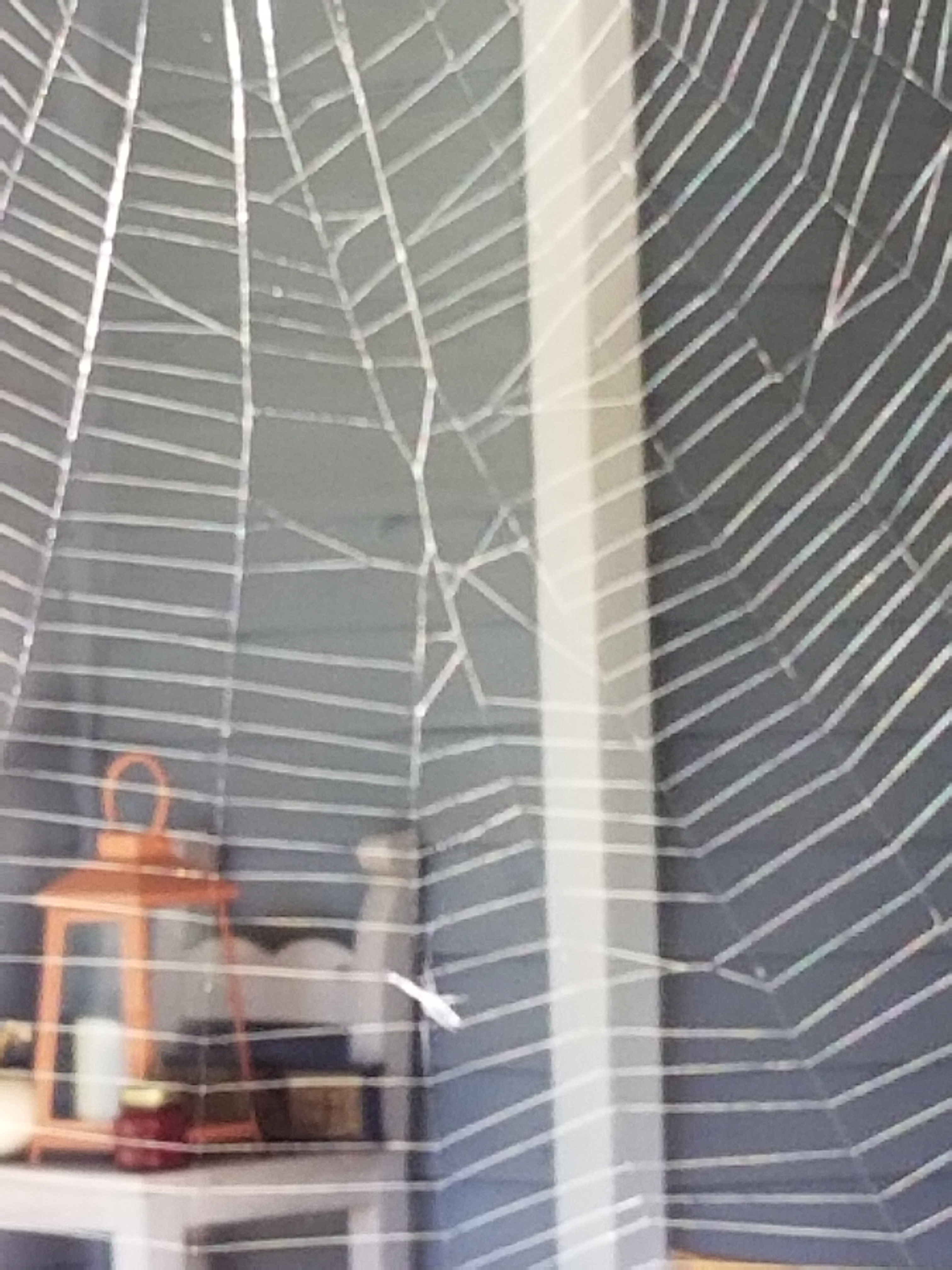 Another fun challenge from Nancy Merrill. Here’s my interpretation:

Starting with a more traditional example…my trip to the local Farmer’s Market yesterday…yum!

But moving to another shot of “produce” that’s anything but STILL!!

My son left on vacation, meaning to bring me this leftover watermelon…

Combine his oversight with 90 degree weather for several days and you get THIS…sort of a Still Life, but more like a weird science project!!! 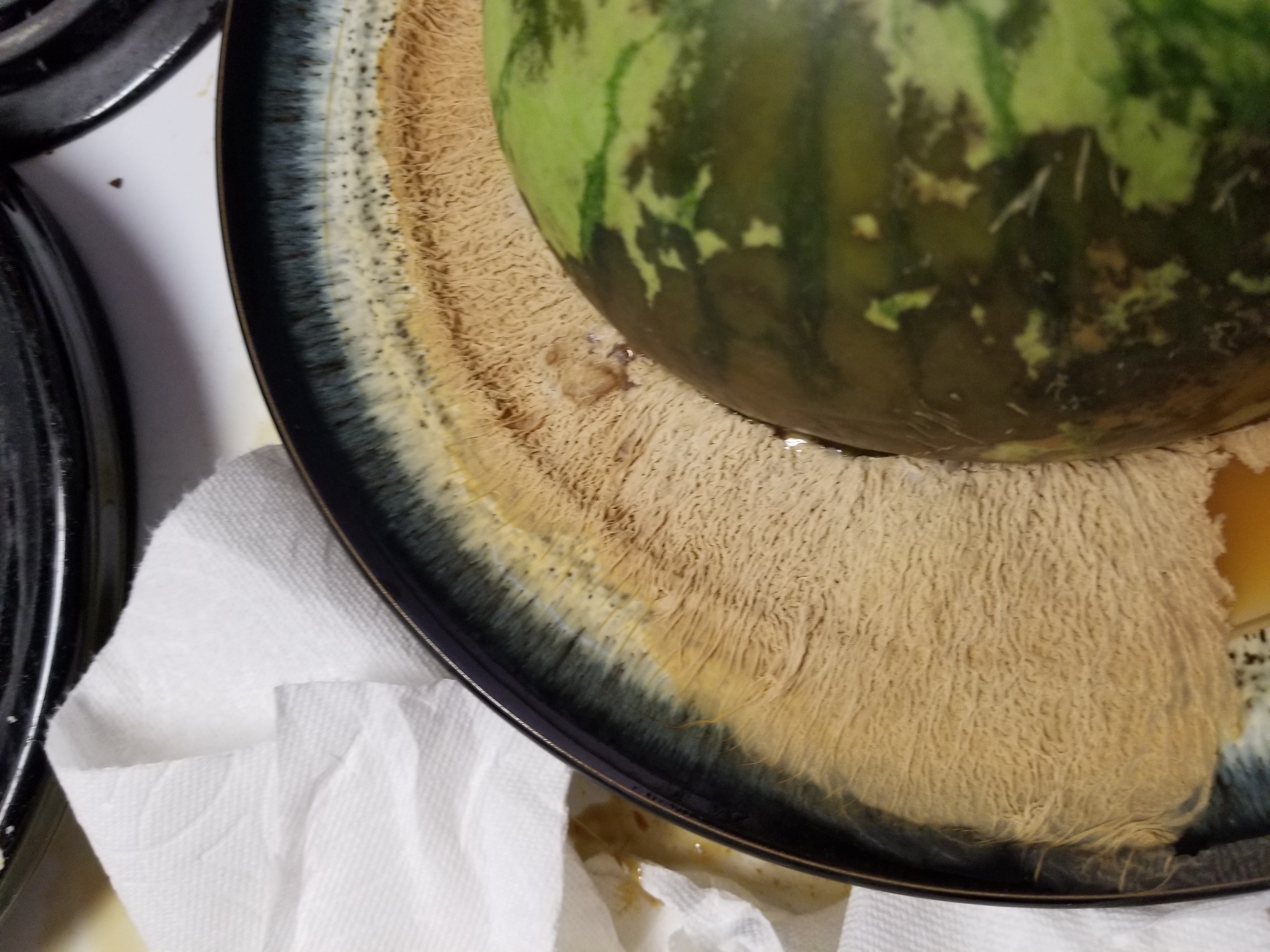 (I told my son he owes me BIG time, as this disintegration all happened on top of the stove! Who knew an old stove top had so many nooks and crannies. There were watermelon, uh, remains, all the way down inside the oven!!!)

But how beautiful, in a creepy, sickening way….

Now, to cleanse your visual palete…

This qualifies as a “still life” because of its extreme contrast to what’s normal for this currently “inanimate object”!

There you have it!

Well, because I am having a brand new experience this month–house/animal sitting for some fish, 2 dogs and a bunch of, uh, fowl, I’ve chosen Chickens as my topic.

I love all birds but never really noticed how beautifully feathered chickens are so I’ve been photographing these guys a lot.

Here are some samples! 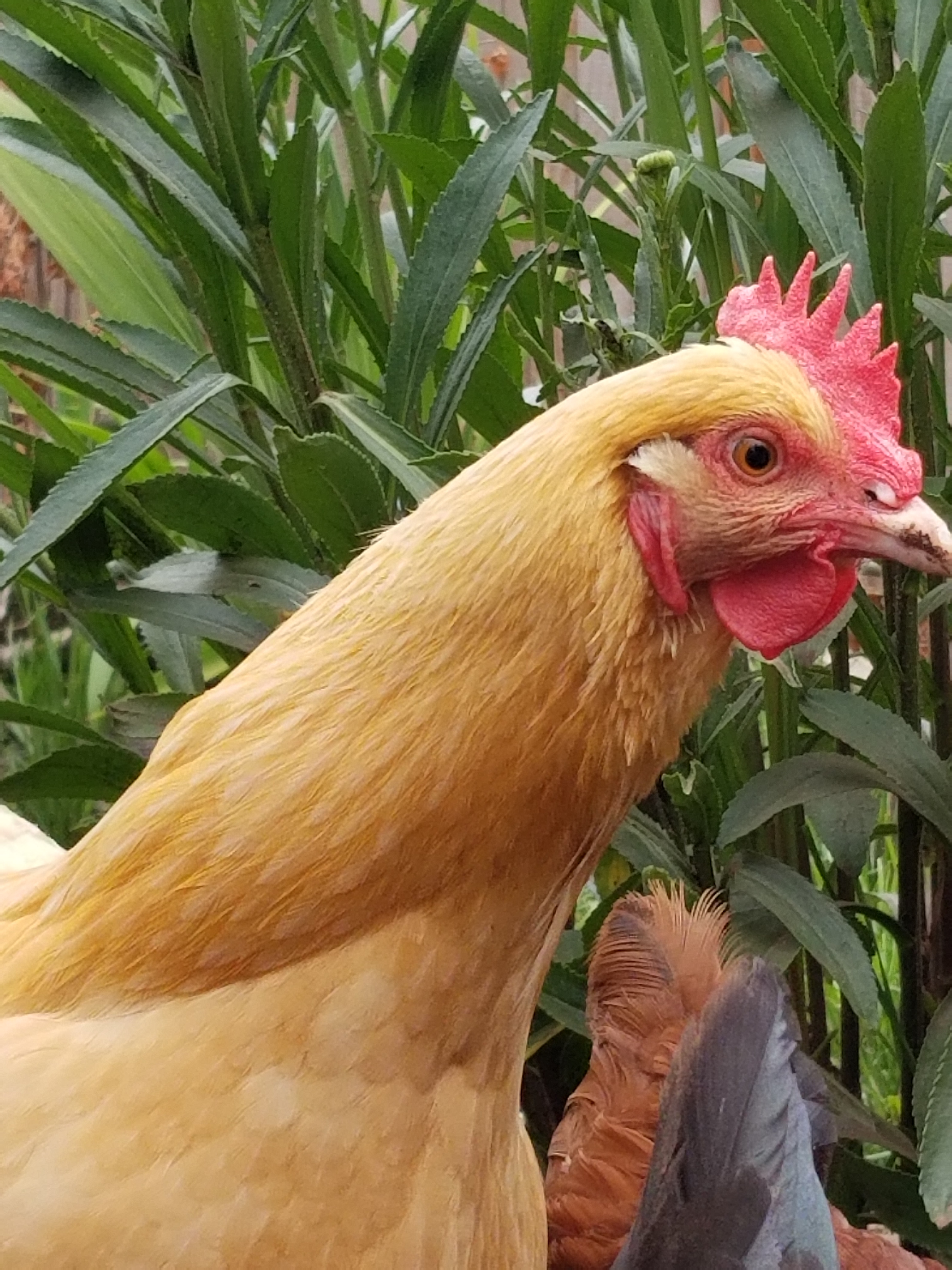 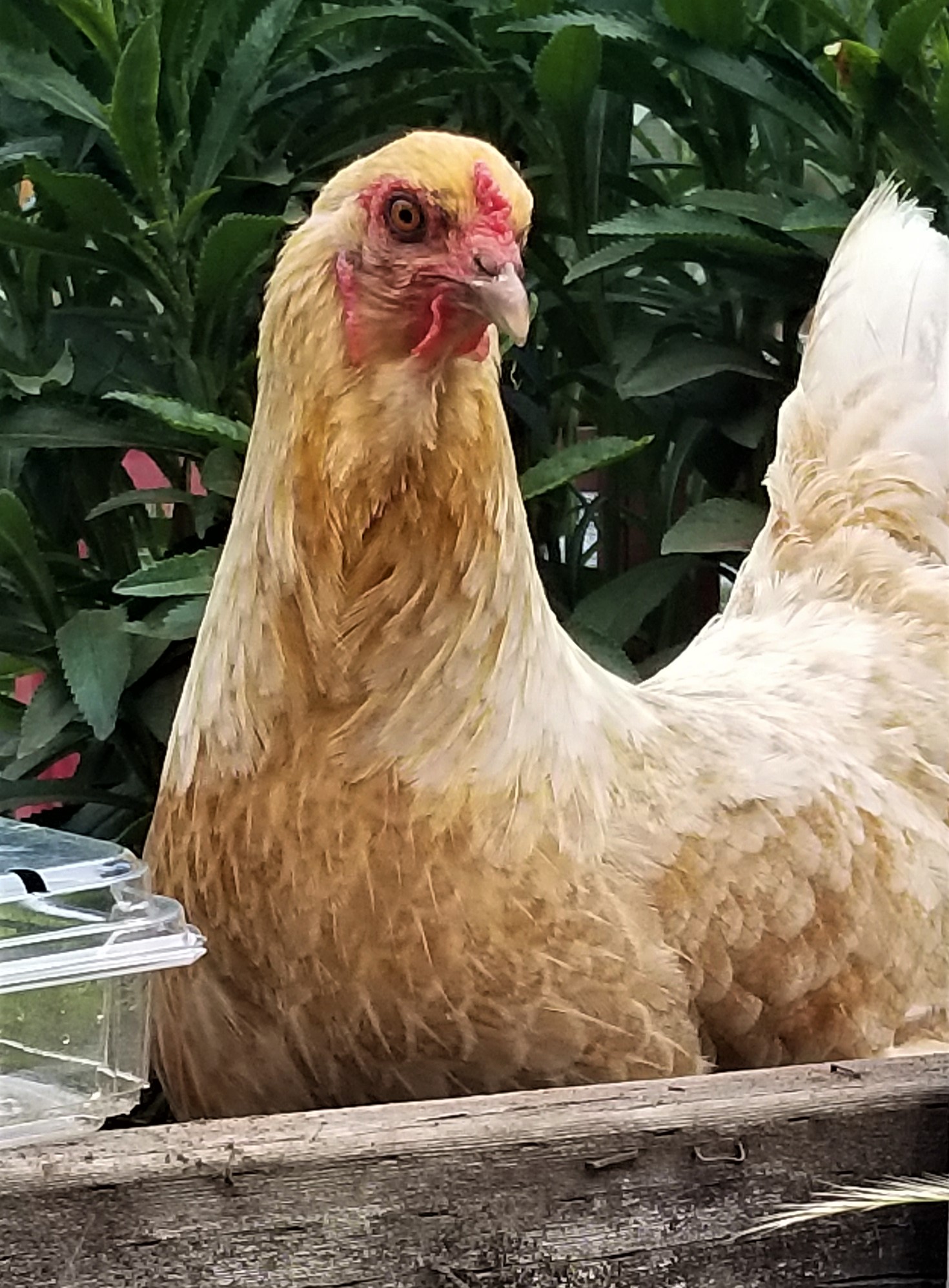 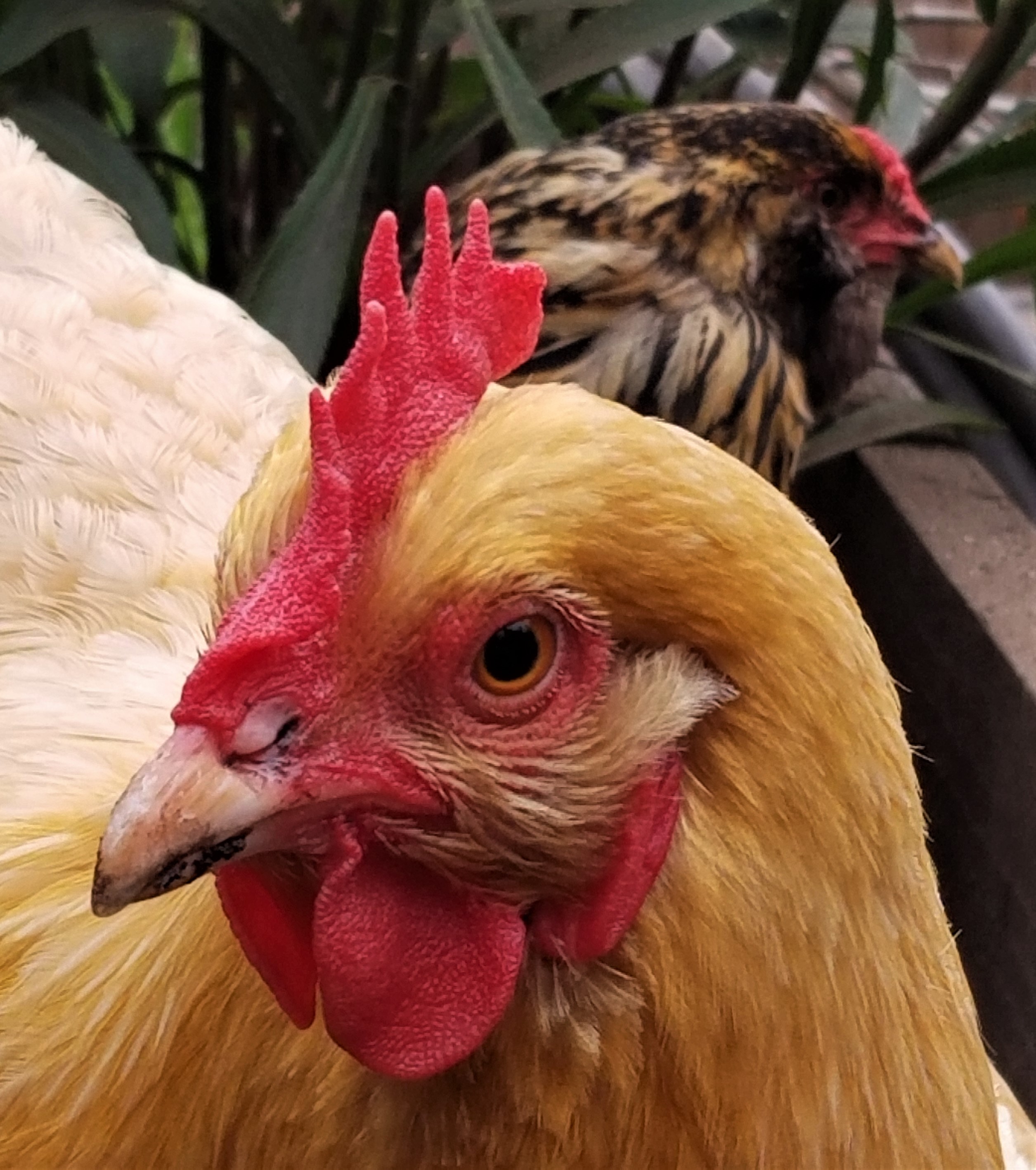 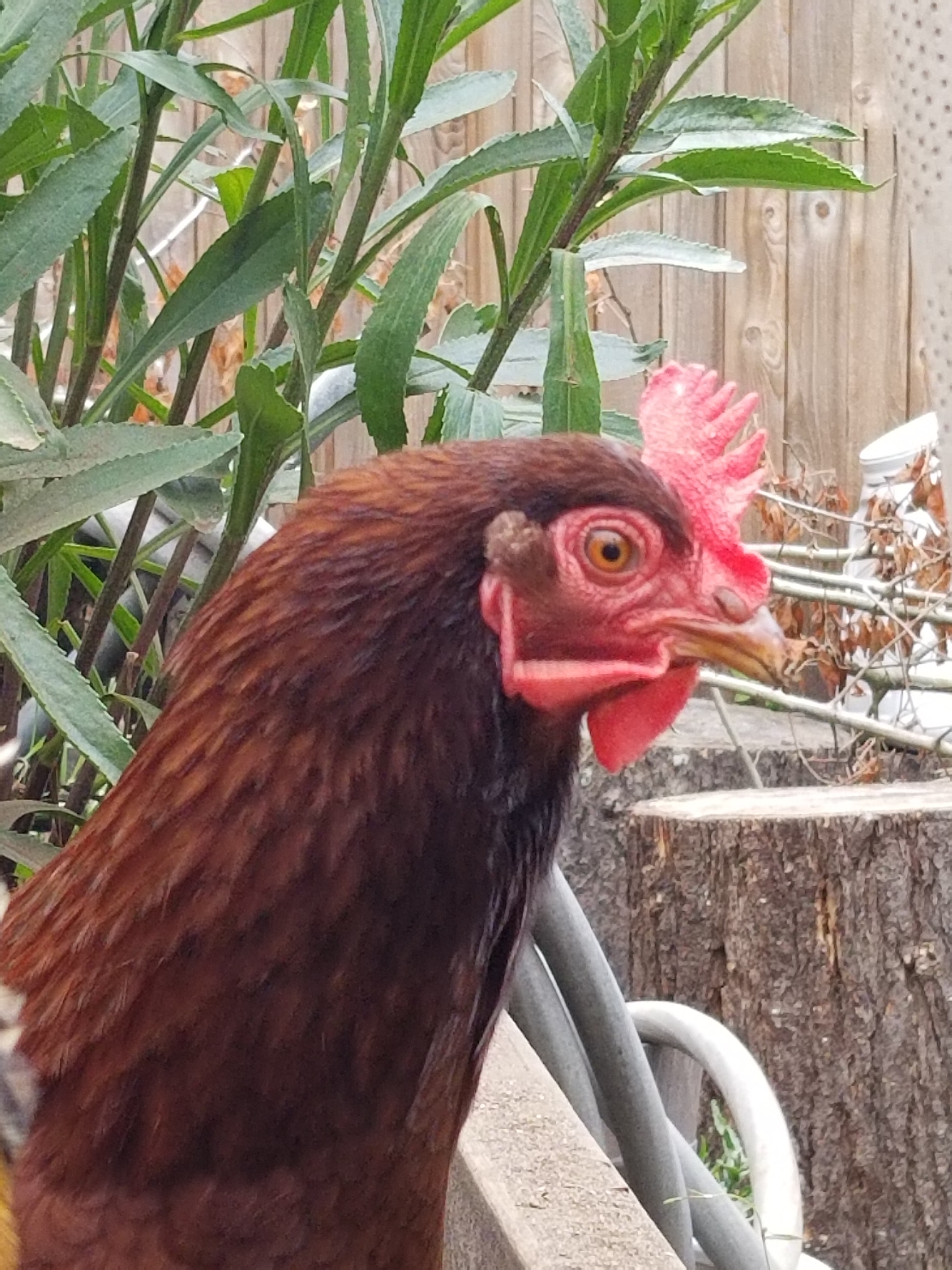 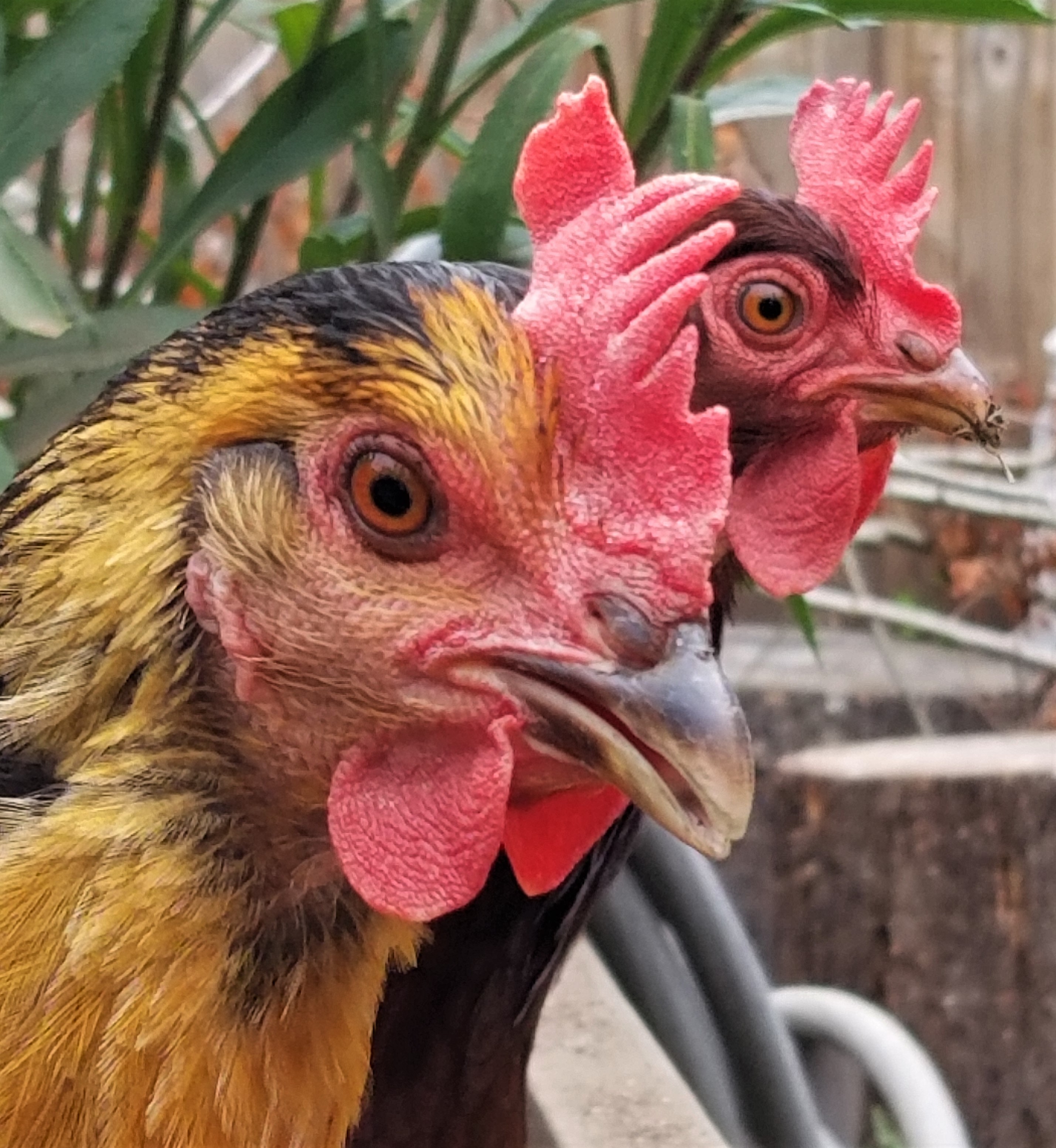 I disappeared again. Not that you would necessarily notice, but I am house sitting for three weeks and it has turned out to be more time and energy consuming than I expected.

I thought I’d be writing beautiful posts and taking amazing photos to share, but I am  exhausted!

It’s a lovely home in a beautiful (and surprising) setting…a bit of country right here in the city!

My primary charges, two wonderful dogs, are a huge handful of sweet, with more energy than hummingbirds!

Even though this property is unusually big for the area where we live, besides playing in the yard, the dogs require a lot of additional walking every day, especially the small Setter. Even though he only has three legs (a recent change for him), he could run for hours, like a full size Irish Setter!

I discovered on my first day here, because of my ailing hip, I have a hard time even making it up the hill (driveway) from the house to the road, so have had to take the dogs in the car to find some flat land to exercise on.

Then there are the fish…I have no idea how many there are but their huge tank needs cleaning…badly. The schedule says not until Wednesday, but I’m going to have to break down and do it today…which requires remembering all the faucets and hose nozzles and twists of valves and different positions and, and. and…

Day one vs Day six

Even as my temporary employers were demonstrating the process before they left, the tank overflowed all over the floor. (Hmm, I wonder where they put that huge, clever twist-able mop…you know, just in case…) And the big tube they used to suck the water out, they almost lost a tiny fish up that tube, right in front of me!

Maybe I’ll just fill the bathtub and let the fish have a leisurely soak while I’m cleaning their home.

Lastly, but actually first each day, are the 7 chickens and 3 ducks! I panicked the first day as I could have sworn they told me there were 13 chickens. I knew they had had a recent Great Horned Owl incident and were down one duck so that first day when I only counted 7 chickens, I lost it! My people were still en-route to their destination so I could not confirm poultry numbers for 36 hours!! Stressful to say the least.

Then, on my second day, I had to quickly learn the difference between a chicken that is almost dead, (unmovable, head lolling to one side, stuck inside the laying house) and what’s called “broody”.

I finally found this article which helped immensely with my panic and guilt! Interesting read, whether or not you ever care for chickens. I moved her yesterday so we’ll see if she stayed moved this morning. (Nope, she was back!)

What Exactly Is a Broody Hen and How to Stop It?

The whole thing was strangely poignant, until I remembered all those years in my late thirties and early forties when I would have done obscene things to be able to have another child!! And, I have “adopted” countless adult children over the years.

The next issue with these chickens is a plethora of eggs! I’ve carried 2 and 1/2 dozen eggs over to my nearby home to share with my neighbors.

All in all, this has been a wonderful, enlightening experience. 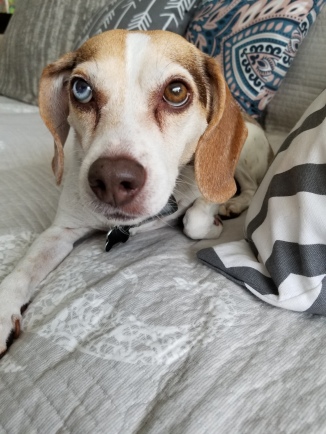