A Face in the Crowd

This might be a stretch. But if you happen to be a regular reader, you might be getting the idea that I am kind of a Rule Bender in a quiet-ish way.

This week, first came the Weekly Photo Challenge. I searched and thought and plotted to find or take a great Face-in-the-Crowd shot. I had the same weird internal ethical debates I always have about taking photos of strangers without their permission…even a face in a crowd.

Then my grandsons invited me to watch a movie. We watched Okja, an odd little Korean film. (Trailer down below, but it’s full of spoilers…better to watch unprepared, in my opinion.)  By the way, Common Sense Media says 15 years plus, and though my grandsons are 12 and 14, I agree. My oldest one kept saying “one minute you think this is a great kid’s movie and the next it’s really, REALLY not!”

I will tell you that while watching it, I couldn’t help but thinking about the Weekly Photo Challenge Theme….which made me start thinking in a whole new direction.

I love animals and I tell you what, it is getting more and more difficult to eat anything with a face. I have been mostly vegetarian for almost 50 years…no red meat of any kind during that time and only the occasional fish and poultry…including Salmon of course ( I DO live in the Northwest after all) and Turkey on Thanksgiving!

With this movie giving me a new way of thinking of the face in the crowd, I remembered an experience a few years back that left me both in awe for the beauty of it and a kind of disgust and guilt for the fact of it.

On a repeated vacation to San Diego, the place where we stay has this massive Koi Pond. For a quarter, you can feed the spectacularly colorful fish.

They were beautiful and I suppose there is value in sharing that contained beauty with people if it heightens their consciousness about our cohabitants on Mother Earth. (Don’t get me started on the two sides of the whole Zoo Debate.)

But it was also an example of a pitiful and frightening feeding frenzy.

There was this one fish-face that caught my eye. I kept my eye on him so I knew it was the same one over and over. His face kept appearing midst the fevered quest for food. 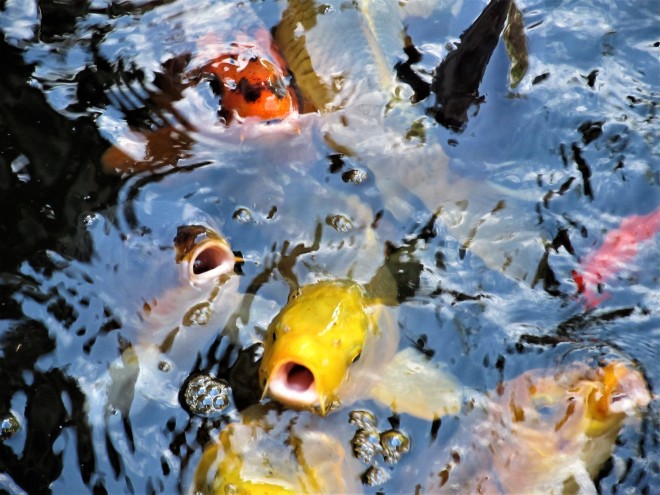 Maybe it was that he was so huge and that made me wonder if this had been his whole life, battle after crowded battle for tidbits of man-made cereal nuggets. 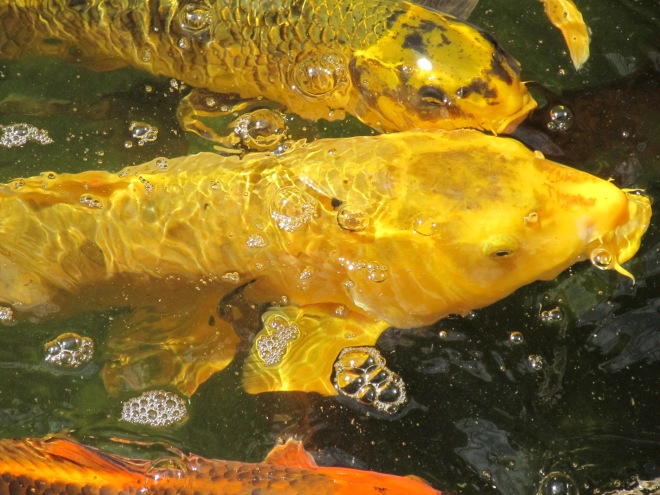 That thought made me incredibly sad. I mean, Koi can live for up to 200 years! And these guys had already been trapped in this resort pond for 35 years that I know of.

I don’t know any resolution, or if there even needs to be one. I mean, I raise Giant Leaf Bugs and keep them in a terrarium for their entire lives…my rationale being they live almost a year longer in my captivity than in their native wild. My cats are strictly indoor cats for the same reason…longer lives than if they ventured out among the hawks and coyotes in my area.

Anyway, this is my Face in the Crowd post for the week.

I’d love to hear what you think.

1. Koi fish originate from Japan and represent love and friendship in Japanese culture.

2. Most koi fish outlive their owners, having a lifespan of 200+ years.

3. They come in a variety of colors, not just orange. They may appear orange, yellow, white, red and black.

4. Owners who received their koi fish as a gift are believed to have good luck.

5. In Japan, koi fish are often passed down from generation to generation, as a family heirloom.