So what’s a Woody station wagon got to do with half light?? Well, growing up in the town of Pacific Beach in San Diego, if you were a true, pre-popular craze surfer, you would be up each morning at Half-Light, to high tail it down to the beach for the best and least crowded waves of the day. A tourist to the area might look out a motel window and see weird dark shapes bobbing up and down way out beyond the shore break. They might even mistake them for a flock of strange sea birds out there. Nope. Those were the most dedicated wave-riding artists…waiting for their wave…however long it took. 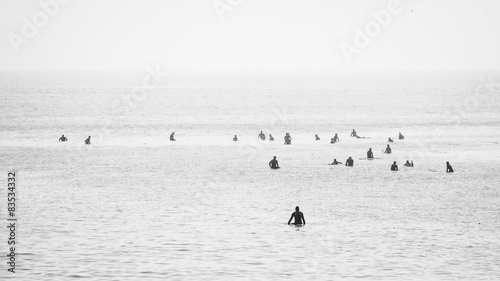 “Surfing is one of the oldest practiced sports on the planet. The art of wave riding, is a blend of total athleticism and the comprehension of the beauty and power of nature. Surfing is also one of the few sports that creates its own culture and lifestyle.”

No idea who first used a Woody station wagon to drag surfboards to the beach but it became the vehicle associated with the surfing culture.

The following info from http://www.carponents.com/content/surfs-up-with-the-woodie-one-of-americas-most-iconic-cars-176

“In the early 60’s, Surfers, who spent their days riding those bodacious California waves all afternoon always seemed to be strapped-for-cash.  In need of an inexpensive form of transportation, they found they could buy woodies cheap, and that they were perfect for lugging around the long 10-12 foot wooden surfboards of the day long.

While not really their goal, surfers prolonged the lives of countless Woodies.  It was something of a California oddity but surfers didn’t actually restore their wagons, they couldn’t afford to.  They simply kept them going.  Groups like the Beach Boys in songs like ‘Surfing Safari’ began to mention and immortalize Woodies in their lyrics, about how they were loaded up with boards and friends and driven to the California Coast and they forever became ingrained as a beloved icon of the surfing community as more and more were adopted by the laid back, fun loving culture.  The connection between surfing and Woodies became permanent.   It’s also said that surfers were the ones who coined the term ‘woodie’. “

Now here’s the sort of personal part. For some reason, when I was a very small child, we had a Woody parked inside our fenced back yard. I honestly don’t remember why or where it came from. I don’t remember ever riding in it, although we did have another station wagon, a white mercury with red trim and red leather interior, that we rode in a lot. That Mercury was the transportation for many of the childhood adventures my Dad provided for his daughters. Most of those adventures involved deserted country roads with us riding on the opened tailgate, strapped in for safety with a make-shift rope “safety belt”. But we never rode in the Woody.

Maybe Dad had the foresight to know that old Woody was a good investment. I do remember it sitting out there until well into my adulthood. Sometimes, when I was visiting my father, a later version of a young surfer would ring Dad’s doorbell to ask about that old car in his yard. My sisters might know what happened to the old Woody. I don’t.

And here’s the really personal part. Many times as a child (according to family legend, as young as four and five years old) I would be discovered before first light, out in the back yard, with my pillow and blanket from my bed, sitting on the hood of that old Woody, all bundled up and leaning back against the perfectly slanted windshield…..doing WHAT, the adults could never figure out.

It’s no mystery to me. Though I don’t remember specifically thinking about this, I’m sure it started out as escape. Maybe if I woke up early enough, and “ran away” to the back yard, I wouldn’t have to start on all those chores no five, six or seven year old should be responsible for (changing diapers, cleaning up, making breakfast, etc.)

And to my lifelong delight, I imprinted on mother nature from those Half-Light escapes, on the absolute beauty and wonder of it all, even the most simple of its forms.

I still love the earliest morning, with its slow but dramatic light changes, the songs of awakening birds-in the spring full orchestras-and the emerging hints about weather for the day. These days, I rarely need it for “running away”, but nothing grounds me more solidly and spiritually onto the earth than sitting outside in the half-light, in almost any weather, eavesdropping on the world as it wakes up.

7 thoughts on “Half-Light #3 for WPC-the Woody”