Check this out for context…

Here’s the story I referred to in my comment to Lisa. A lot of it is the version I wrote when I was 9 or 10 years old, and then I added to it (mostly the sarcasm) at about 15 years old.

But, as Paul Harvey used to say, “And now, the rest of the story.”

Having a duck for a pet was NOT my idea in the first place. I was much more of a Lassie or a Rin Tin Tin gal. I couldn’t help it that they had a prize drawing the Saturday afternoon before Easter when we were just innocently attending the matinee showing of Pinocchio at the Roxy Theater. I didn’t ask for my very own ticket stub to have the triumphant number, thus making me a winner of something for the first time, ever, in my whole life. I never even intended to be a contestant. I was only seven.

It also wasn’t my fault that I had to carry that squirmy baby duck in one hand and hold onto my squirmy 4-year-old sister with my other. So, who could blame me for dropping that duckling, a time or two, on the way home? It was 10 blocks to walk after all.

And since I was a first time duck owner, how was I to know that baby duck’s wings were not supposed to stick up in the air, all crooked like this duck’s did; well, after those 3 or 4 drops anyway.

Oh, I guess it was cute enough, all soft and fluffy and yellow, but I had wanted a dog, a BIG dog, my whole entire life. But No, I get a duck, with funny broken wings that never did lie flat against its body like they were supposed to. And it never did fly. It mostly just flapped.

Not wanting to invest much of my creative energy in this creature, I just started calling it Fluffy…because it was.

I was the oldest kid which, in our family gave me tons of extra jobs to do, but it also gave me the right to have my very own room. So, if I was going to have to SHARE my room now with a duck, it better not poop and pee everywhere. How was I supposed to know that you couldn’t housebreak a duck? I just did it. It took a few weeks but after it learned, it only pooped in a cardboard box. The whereabouts of the peeing I am less sure.

I’m sure now that my folks thought this duck was a “short timer” because of the broken wings and all. But, it was still in my room, months later, when it had lost all that yellow fuzz and become this pretty brown and iridescent colored animal whose cute little squeak had disappeared and been replaced with a VERY LOUD quack. It was that quack that must have inspired my Dad to get busy out there in our back yard, creating a duck paradise.

One Sunday morning when I got up, he asked me to come out into the yard. Now see if you can picture this. It was a huge back yard with the requisite San Diego banana “trees” and citrus trees (lemons so sweet you could peel and eat them like oranges). We also had a swing set, a home made gazebo and two beautiful, flowering Oleander trees, the dangers of which, we had already been taught; (“It’s OK to smell the blossoms, but if the trees are ever on fire, do NOT breathe the smoke.”) From the edge of the cement patio, where the garden hose could easily reach, my Dad had dug two trenches out to the Oleander trees. Then he had dug moat-like ponds around each tree and connected those to each other with another trench. This elaborate system of waterways was to be Fluffy’s new home. Finally, it could be a REAL duck (just like Pinocchio had become a real boy).

That was the plan anyway.

Although old Fluff seemed content enough in the daytime to swim around and around those trees, as soon as it would start getting dark, there would be that duck, loudly protesting, on the back porch, until it was let in for the night. So I continued to have a night time roommate…..until one morning when the strangest thing happened.

Fluffy, who, OK, OK, by now, was my pal, had remained non-gender specific. Then, this one morning I woke up and there was a large, brownish egg next to Fluffy in her “nest” (which consisted of a bunch of rags in one corner).

My Mom was appalled.

I think it was some kind of Last Straw. For me, it simply solved the gender question. I was pretty sure it was the girls that laid eggs. From then on there was an egg every morning but no matter how hard I tried to wake up early, not make a move in my bed and to watch, I never was able to witness this amazing feat taking place.

“That damn duck should NOT be in this house!” is what I heard, day and night, and then I heard “well, at least we can eat the eggs.” Of all the nerve! They wanted to EAT the EGGS. AAARGH!! I mean, REALLY! I wasn’t sure why I even cared but hey, I figured, my duck, my eggs. At one point, we actually had 11 eggs in the fridge but they mysteriously disappeared one morning. I don’t even want to think about where they went.

Somewhere along in here, the next door neighbors adopted a HUGE, yellow Tom Cat, biggest one I had ever seen. He roamed the neighborhood pretty freely and this, for some reason, had my normally calm Dad very upset. What happened next, I didn’t even find out about until years later when my father, figuring the statute of limitations was up on Parental Betrayal, told me the whole story.

Evidently, Daddy was extremely worried that I would be wounded beyond healing if one day while Fluffy was paddling around in the back yard, that big old yellow cat stopped by for a meal. So, plotting with my mother and all my younger sisters (it seems I was to be betrayed by my entire family) they came up with a plan.

One Saturday morning they told me that due to my “oldest kid privileges”, I got to go to Story Time at the public library. (The trick they were about to play on me was dirty enough without using that to get me to cooperate.) I was dropped off in front of the library, and told they would be back for me in 2 hours. I thought I was pretty hot stuff. Not even 8 years old yet, but old enough to go to the library all by myself. Their sinister plan was to charge back to the house, capture my duck and take her to Balboa Park, up by the zoo, where all the wild ducks wandered free. This actually was a well-intentioned plan. They thought it would be easier for me to recover from the inevitable loss of my duck if I was told she had a miraculous cure, her broken wings magically repaired, and she simply flew away while I was at Story time.

The tale he confessed years later went like this. They all drove to a secluded place in the park where there was a pond and lots of city ducks. Dad, with my pal Fluffy under his arm, my traitorous family sitting in the car watching, walked out across the expanse of lawn toward the pond. He said a few words of good-bye, and tossed my duck toward the water. Satisfied that he had done his duty as a loving, protective father, he turned to walk back to the car.

Well, Fluffy was having none of this. She duck-waddled after Dad until she caught up with him, and then pacing herself to stay even with him, calmly followed him back to the car.

This could be a very long story. Let me just say that after several attempts, Dad gave up, and they brought Fluffy back home. Hey, imprinting is imprinting and like I said before, you can’t teach an old duck….

I think I had fluffy until I was about ten. She eventually learned to live outside, day and night. I was finally convinced that we shouldn’t waste her eggs, and duck egg omelets became a weekly treat. And ultimately, just as my Dad had feared, that damn orange cat got her.

But, I tell you what. She was my pal and what I know now is that she was an extremely unique duck. Not a bad first pet. Not bad at all. 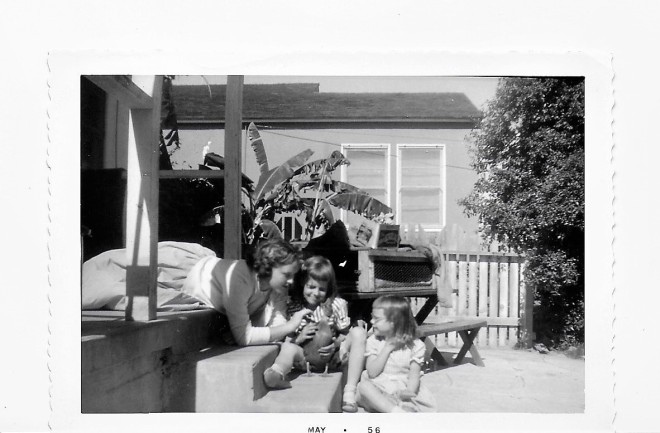 That’s me in the center…clearly in love with my duck! (also pictured are neighbor girl and my sister, Eileen)

19 thoughts on “Fluffy, the House Duck”