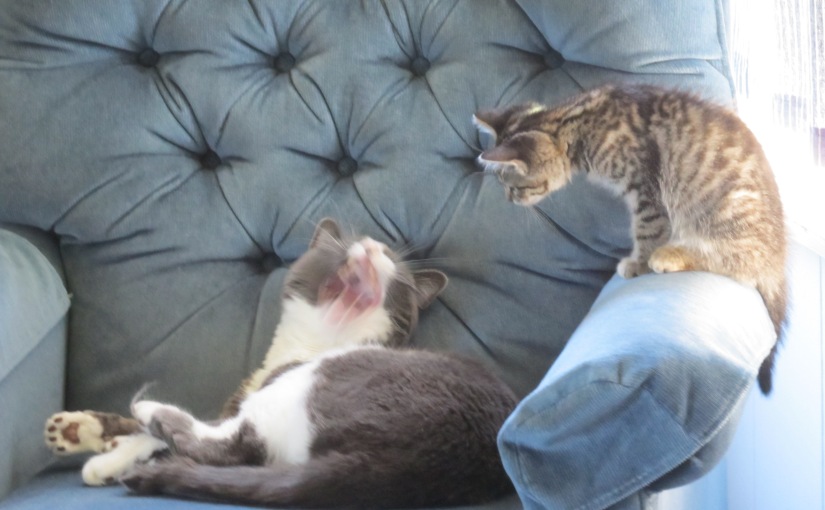 We are a two cat household. That’s it. Just 2 cats. No dogs. No fish. No birds. And they have to be indoor cats as we are inundated in our blissfully country-like neighborhood, with kitty cat predators. Mostly urban coyotes, but also eagles and owls! (Well, I do have those bugs, but seriously, we are a TWO CAT house.)

Until last summer when Lucy delightfully intruded into our lives.

I won’t tell you the whole story of each cat…that could be a whole coffee table book…just a tidbit about each.

There’s the King, 16 year old “Zorro, the Grey Blade”, the Sean Connery of cats, named for his slashing ability! (He is my animal Soul Mate.)

Next comes “Phineas, the terrorist”, named for his ability to wreak havoc with anything susceptible to gravity or that involves water! I have not had a vase of flowers for six years now. Nothing is safe really; plants, art hanging on the walls, the toilet, and anything my hands touch. This keyboard I’m using is his bed! (I just know he knows I am allergic to him!)

And last, along comes Lucy, the princess. We found her in the woodpile at 4 weeks old and there was just no getting rid of her!

(read her story at  https://chosenperspectives.wordpress.com/2016/01/08/warning-cuteness-overload/ ) 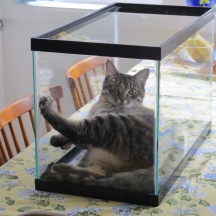 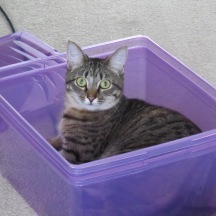 I asked my grandsons to come up with a powerful girl-name for this kitten. I knew she’d need to be strong with two such feisty (and alpha) older brother cats. The boys had seen previews for the movie “Lucy” (Scarlett Johansson) so that’s the name they chose.

But here’s the deal, Lucy has not turned out to be super-hero material. She is tiny, delicate, gentle and both plays with and gives clawless affection. I’m not saying she is perfect. She has destroyed her share of plants and she tends to eat things she shouldn’t (camera strap, phone cord, etc.) but man is she ever sweet. And I have to say, polite. You only have to tell her “no” about something once or twice and she remembers. 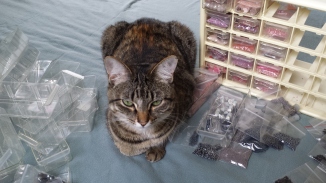 Lucy, resisting the beads and buttons I make jewelry with.

When Lucy and Zorro met it was mutual Love at first Sight.

I know it’s probably some “honor the alpha” behavior but she loves to clean the big cat’s ears.

She has never been afraid of him and treats him like her personal teddy bear.

So all that is the background to tell you what I witnessed last night.

We’re in bed, our two-cat family (with three cats) gathered around with us as usual. Lucy spots her very favorite toy (or what’s left of it after playing it to pieces) but it is underneath Zorro, who is asleep. She wants that toy…bad. She quietly circles the Big “Z” but can’t figure out how to get her toy without disturbing him. So here’s what she does.

I’m not kidding. She ever so gently, lays her paw on his head, and then taps, twice. “Uh, excuse me but you are on my toy?”

Zorro is still old cat-snoring and doesn’t budge. So Lucy does this.

She finally gives up and quietly assumes a waiting position next to Zorro and her toy.

Can you see the piece of clear plastic cord that Zorro’s body has anchored underneath him?

Don’t give me that whole Anthropomorphism argument. I know what I saw.

And if you had been there the day that both litter boxes had accidentally been blocked from the cats’ access, so one of them left a single pristine turd right on James’ side of the bed (he is the cat box maintainer), you’d be a believer too!

12 thoughts on “Warning! You may have to be a cat lover to appreciate this one…”